T-SIMn: Towards a Framework for the Trace-Based Simulation of 802.11n Networks 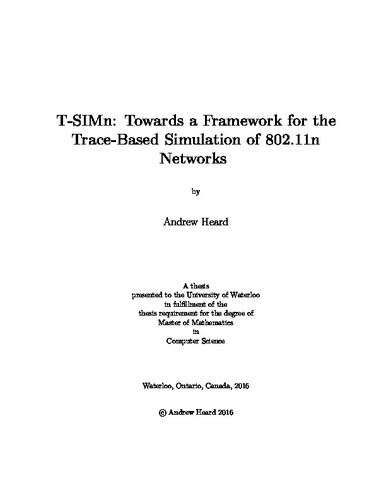 With billions of WiFi devices now in use, and growing, combined with the rising popularity of high-bandwidth applications, such as streaming video, demands on WiFi networks continue to rise. To increase performance for end users the 802.11n WiFi standard introduces several new features that increase Physical Layer Data Rates (PLDRs). However, the rates are less robust (i.e., more prone error). Optimizing throughput in an 802.11n network requires choosing the combination of features that results in the greatest balance between PLDRs and error rates, which is highly dependent on the environmental conditions. While the faster PLDRs are an important factor in the throughput gains afforded by 802.11n, it is only when they are used in combination with the new MAC layer features, namely Frame Aggregation (FA) and Block Acknowledgements (BAs), that 802.11n achieves significant gains when compared to the older 802.11g standard. FA allows multiple frames to be combined into a large frame so that they can be transmitted and acknowledged as one aggregated packet, which results in the channel being used more efficiently. Unfortunately, it is challenging to experimentally evaluate and compare the performance of WiFi networks using different combinations of 802.11n features. WiFi networks operate in 2.4 and 5 GHz bands, which are shared by WiFi devices, included in computers, cell phones and tablets; as well as Bluetooth devices, wireless keyboards/mice, cordless phones, microwave ovens and many others. Competition for the shared medium can negatively impact throughput by increasing transmission delays or error rates. This makes it difficult to perform repeatable experiments that are representative of the conditions in which WiFi devices are typically used. Therefore, we need new methodologies for understanding and evaluating how to best use these new 802.11n features. An existing trace-based simulation framework, called T-RATE, has been shown to be an accurate alternative to experimentally evaluating throughput in 802.11g networks. We propose T-SIMn, an extension of the T-RATE framework that includes support for the newer 802.11n WiFi standard. In particular, we implement a new 802.11n network simulator, which we call SIMn. Furthermore, we develop a new implementation of the trace collection phase that incorporates FA. We demonstrate that SIMn accurately simulates throughput for one, two and three-antenna PLDRs in 802.11n with FA. We also show that SIMn accurately simulates delay due to WiFi and non-WiFi interference, as well as error due to path loss in mobile scenarios. Finally, we evaluate the T-SIMn framework (including trace collection) by collecting traces using an iPhone. The iPhone is representative of a wide variety of one antenna devices. We find that our framework can be used to accurately simulate these scenarios and we demonstrate the fidelity of SIMn by uncovering problems with our initial evaluation methodology. We expect that the T-SIMn framework will be suitable for easily and fairly evaluating rate adaptation, frame aggregation and channel bandwidth adaptation algorithms for 802.11n networks, which are challenging to evaluate experimentally.