Development of an Integrated Model of Primary Visual Cortex 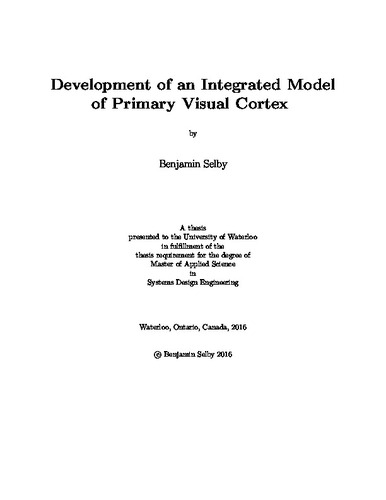 Network-level models of visual processing have potentially important insights for applications such as computer vision and robotics. Primary visual cortex is a key stage of visual processing with involvement in many circuits proposed for these applications including motion tracking, object recognition, and control of eye movements. However, no model of V1 to date has captured the complete set of observed behaviour in a large-scale model. Linear kernel methods with threshold and divisive non-linearities can reproduce classical receptive field behaviour, but not the full range of non-classical behaviours. The stabilized supralinear network (SSN) provides a simple scheme of lateral interactions that produce a wealth of observed V1 behaviour not previously captured with linear kernel methods. However, the SSN is restricted in stimulus selectivity and is not pixel-computable, limiting its utility for real-world applications. Integrating a linear kernel model with the SSN resulted in a model that is pixel-computable and produces a wide range of classical and non-classical behaviour. With further development this network model will be usable in visual processing circuits. The SSN was also expanded to use binocular stimuli. Using an optimization procedure, SSN parameters were found that produce interocular transfer of suppression in excitatory units, but not inhibitory ones. The lack of interocular transfer in inhibitory units may indicate that an alternate inhibition-stabilization scheme is more biophysically realistic. Mammalian visual perception is enabled not only by neural processing but also by precise eye movements, which allow for efficient scanning of the environment. This thesis describes the requirements for a robot that can orient cameras with the same dynamics as macaque monkey eyes as well as a camera system that reproduces macaque visual acuity.