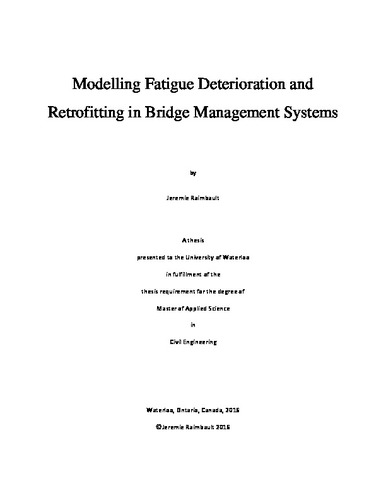 Similar to any other structure exposed to the elements, bridges deteriorate and degrade over time. This deterioration can result in costly maintenance and repair if it is addressed properly or damage and even loss of life if it is neglected. Due to an increasing number of bridges and limited funds, more economical and efficient bridge management systems (BMSs) were created for planning maintenance and rehabilitation projects. However, the element classifications used in these are broad, and the transition probabilities are based only on inspection history and experience. In particular, the most important form of loading, cyclic loading from trucks, and its effects on fatigue-susceptible features of a bridge such as welds is not considered. Fatigue damage is difficult to measure in the field, as it can take decades to develop, and even in a laboratory setting is time consuming. Computer models have been developed and calibrated from laboratory data, but modelling fatigue is very complicated as it may require consideration of non-linear material behaviour and crack closure effects in order to ensure accurate predictions, and performing Monte Carlo Simulation (MCS) to obtain statistics of crack growth requires thousands or millions of trials. This large computational cost makes computer simulations impractical for the analysis of large stocks of bridge infrastructure. Multiplicative Dimension Reduction Method (M-DRM) is a tool, which can be used to calculate the statistical parameters of the response of a function with a massive reduction in the number of computations required. However, it is not known if techniques such as M-DRM will reduce the computational cost to a sufficient extent to permit the analysis of many structures. One possible solution would be to use simple BMS-like models to simulate fatigue deterioration and the various management actions. This would involve the calibration of a Markov chain, which uses a set of probabilities and current information to predict the condition of an element in the future. However, it is not known if this simplistic approach will be sufficiently accurate in capturing the effects of the various management actions, in order to determine the optimal maintenance strategy. The research objectives in this thesis are therefore 1) to evaluate the effectiveness of Strain-Based Fracture Mechanics (SBFM) and Multiplicative Dimensional Reduction Method (M-DRM) for predicting the statistics of fatigue crack growth, 2) to compare the computational effort of M-DRM and Monte Carlo Simulation on SBFM in this context, and 3) to calibrate simpler BMS-like Markov chain models and apply them to single welds to assess their accuracy and suitability for modelling fatigue deterioration and making high level fatigue management decisions. To perform the first objective, SBFM and M-DRM were used to draw fatigue crack growth curves, known as Stress range vs. Number of cycles to failure, or S-N plots, and compare them against existing S-N curves. Different loading histories were analyzed, both constant amplitude and variable amplitude. The second objective was performed by analyzing the accuracy and difficulty of plotting the S-N curves from the two methods. To perform the third objective, two sizes of Markov chains were calibrated using three different methods: calibration using S-N design curves, calibration using SBFM failure data, and calibration using SBFM crack growth data. To compare these methods, in addition to the curve fits from the calibration methods, a life cycle cost analysis (LCCA) was performed, which assigned costs to different maintenance actions, such as inspection, treatment, repair and replacement, and combined them to form different maintenance strategies. These were then compared to the original graphs for a non-biased comparison method. As these were only calibrated to a Detail Category C, a local stress approach was developed to transform the Markov chains to other detail categories. As fatigue can be affected by other mechanisms, the correlation between elements was investigated, specifically between fatigue and corrosion. An example bridge was then designed, and the deterioration models developed in this thesis applied, with the effect of different maintenance strategies studied. Several conclusions were drawn from the work performed in this thesis. From the SBFM and M-DRM analyses, loading history does affect the position of the S-N curve, with variable amplitude loading curves falling below the constant amplitude curve. M-DRM can accurately predict the statistics of fatigue crack growth for both for as-welded and treated specimens. The M-DRM analysis was performed using a fraction of the time required to perform the MCS analysis; approximately 2 full days were required to calculate one S-N curve using MCS, compared to less than one hour for M-DRM. M-DRM was also able to perform sensitivity analysis on the variables. Of the three calibration methods for Markov chains, calibration using the probabilistic SBFM crack growth data performed the best when comparing plots of individual condition state probabilities and based on subsequent LCCA. Of the two Markov models used in this thesis, using five and ten condition states, both predicted the same optimal strategy with similar absolute values. The correlation between corrosion and fatigue was also studied and modelled using the Markov chain approach, and it was found that high levels of corrosion can have a significant impact on life-cycle cost, and can even change the optimal fatigue management strategy. Using the full-scale bridge designed in this thesis, by comparing the various management strategies, a cost savings of as much as $2,050,000 over the 100 year life span was obtained by choosing the optimal management strategy. The flexibility and ease of use of the Markov chain models was exploited to easily analyze and modify a number of alternative management strategies, thus demonstrating the usefulness of this approach for modelling the fatigue deterioration and retrofitting of bridges. This work is mainly aimed at bridge infrastructure owners, but the methodology could be applied to any cyclically loaded welded structure.