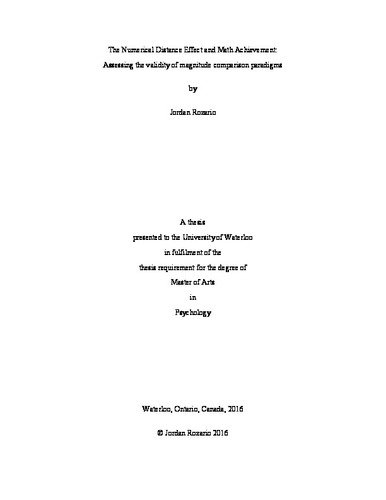 The numerical distance effect (NDE) is the inverse relationship between response times and the distance between two numbers in numerical magnitude comparison tasks. This robust effect has been obtained using multiple magnitude comparison paradigms (MCP). In addition, the size of an individual’s NDE has been found to predict mathematical achievement. The present investigation assessed 4 MCP (distance and ratio controlled simultaneous comparison; and primed and non-primed comparison-to-a-standard) for internal reliability, convergent validity, and their ability to predict mathematical achievement and numeracy. Results demonstrate that performance on MCPs correlated with math ability; however, only the NDE in the simultaneous comparison task is uniquely related to math achievement and numeracy.