States of Dependency: Infrastructures of the Common 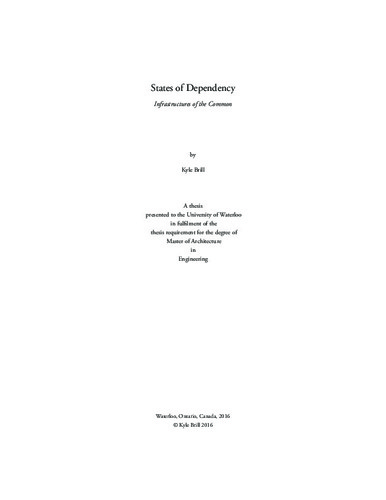 The thesis States of Dependency is concerned with exploring architectures relationship to socio-political and ethnographic conflict within Jerusalem. As a city of incredible political and national importance to both Israelis and Palestinians, its planning and urban development have become inseparably linked to the multi generational conflict that has gripped it; a conflict which is fuelled by issues of sovereignty, cultural identity, messianic mythology, and religious history. Within the context of post 1967 Jerusalem, architecture and urban planning have been delegated the task of both constructing national identity, and in solidifying the relationships, or lack thereof, between Israelis and Palestinians. Thus, the way in which the city is designed and constructed is essential to the management of the conflict at an urban scale; engendering an ideology of ‘border making’ between Jerusalem’s ethnic communities. Given this the image of the city, and how it is understood, become essential components in furthering ethnically exclusionary practices. This thesis explores the connection between architectural expression, our perceptions of it, and the perpetuation of the ethnic conflict in Jerusalem. It challenges the definitively isolationist model of its ethnic communities by seeking to define the role of public space within this context, and speculates on the formation of a commons between two segregated communities; firmly entrenched in the idea that a scenario of political equality can only be engendered through an understanding of the other. Specifically, the work examines the districts of west and east Musrara, sites just to the north of the Old City, and reimagines the civic function of the no-mans land that runs between them. The project works to literally bridge the Israeli western half and the Palestinian eastern half of this area, and explores the educational and civic role that a truly public space may provide in this context. It asks whether architecture, and public space, can operate as mediators within complex social systems, thereby becoming mechanisms of political criticism. In this way, the work does not seek to propose an architecture which offers a solution to the Jerusalem question, but rather one that recognizes and utilizes its urban reality to become the impetus for a solution to emerge. In essence, this work is grounded firmly in the notion that within conditions of instability and imbalance lie the potentials for new urban, architectural and social conditions to emerge; it proposes an infrastructure of the commons.