The Effects of Ambiguity: A Feminist Study of Human Signifiers in Human-Computer Interaction 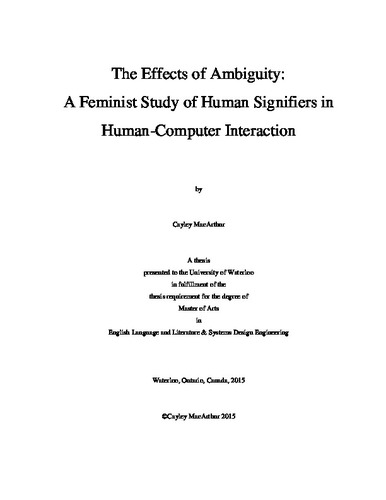 A lack of diversity in STEM (science, technology, engineering and math) fields has been a popular topic of discussion and a persistent challenge in terms of recruitment, engagement, opportunity and equality spanning decades. It is not well-understood how new technologies created by the human-computer interaction (HCI) community affect identity construction in minorities such as women, people of colour, and persons with disabilities. The Feminist HCI movement calls on the community to engage with broader moral commitments such as empowerment, diversity, identity and equity, as well as epistemologically embracing multiplicity over universality. However, a gap remains between theory and practice. I argue that goals of feminist rhetoric must be met in the community’s discourse habits as an essential step to more inclusivity in HCI; these goals include dismantling certain oppressive language structures. Feminist theory suggests that the abstract, gender-neutral language used to talk about people in male-dominated systems actually elicits imagery perceived to be male, which would function in contrast to the intentions of writers who want to be gender-neutral when using these words. In this thesis, I present a study used to determine whether the human signifiers used in HCI publications have the same effect. Findings suggest that these HCI “people” words do generally have a tendency to be perceived as male. Insights from this study reveal some tendencies in how these words are thought of among a general audience. I recommend a stronger commitment to Feminist HCI in theory and practice, and greater awareness and sensitivity towards the connotations elicited by these falsely universal terms that are not representative of the diverse community within and outside of HCI.