Application of Solid Phase Microextraction for Lipid Analysis and Lipidomics 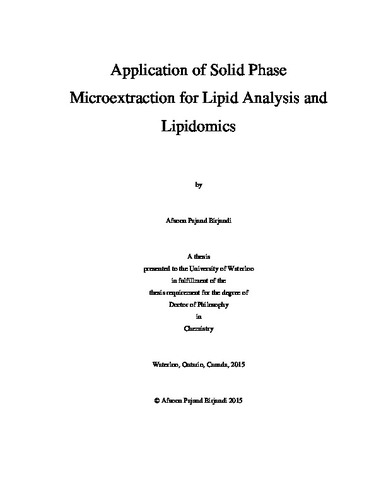 Although the latest advancements in lipid analysis technology provide an excellent opportunity for the comprehensive study of lipidome, fulfilling the analytical requirements at the desired quality is still a major challenge. In lipidomic workflow, sample treatment and extraction for simultaneous analysis of endogenous lipids is of a great interest, especially when a number of undesirable circumstances such as ionization suppression are the matter of concern. In this thesis, I describe several approaches for both in vivo and high throughput in vitro sample preparation for molecular lipidomics based on solid phase microextraction (SPME) in the direct extraction mode. The initial research presented in this thesis focused on the analysis of fatty acids (FA) as the major building block and most fundamental category of entire lipid family. In this study, we present a direct immersion solid phase microextraction method coupled to a liquid chromatography-mass spectrometry platform (DI-SPME- HPLC-ESI-MS) for determination of unconjugated fatty acids (FA) in fish and human plasma. The proposed method was fully validated according to bioanalytical method validation guidelines. The affinity constant (Ka) of individual FAs to protein albumin was determined to be 9.2 × 104 to 4.3 × 105 M−1. The plasma protein binding (PPB%) was calculated and found to be in the range of 98.0−99.7% for different polyunsaturated fatty acids (PUFAs). The PUFAs under study were found at a high concentration range in fish plasma, whereas only a few were within quantification range in control human plasma. The method was successfully applied for monitoring PUFA changes in plasma samples obtained during operation of a group of patients undergoing cardiac surgery with the use of cardiopulmonary bypass (CPB). The most significant v alteration induced by surgery was noticed in the concentration level of α-linolenic acid (18:3, ALA), arachidonic acid (20:4, AA), and docosahexanoic acid (22:6, DHA) soon after inception of CPB in all cases. The quantitative results obtained for fatty acid measurement have encouraged me to expand my study for analyzing a broad spectrum of complex lipids as the next step. Therefore, in Chapter 3 biocompatible thin film SPME technique is introduced for quantitative analysis of lipids from human plasma in a high throughput manner. Robotic assisted 96-blade thin-film SPME was employed for the extraction of a group of non-endogenous lipids from plasma, and satisfactory results for recovery and reproducibility were achieved. In addition, the new extraction method eliminated the need for multi-step sample handling including centrifugation, filtering, solvent evaporation, and reconstitution. The total preparation time was reduced to less than 2 min per sample, while artifacts and sample loss were minimized due to the simplified method. Absolute recoveries were typically 1-2%, thereby avoiding sample disturbance while providing proper sensitivity. Furthermore, endogenous and non endogenous groups of target lipids were quantified, and excellent linearity and method precision were obtained. The regression calibrations obtained from five different plasma batches represents RSD less than 5% in all cases, clearly indicating the absence of matrix effects and lot-to-lot variations of the proposed method. The linearity (R2 > 0.99), inter and intra-day reproducibility (2-7%), and precision (1-12%) provided verification of method validity. Finally, the evaluated SPME method was compared to the conventional Bligh & Dyer technique for the untargeted lipidomic study of human hepatocellular carcinoma (HCC) cell vi lines. Cells were cultured under standard conditions in two individual groups; one cultivated normally as a control group and another supplemented by eicosapantanoic acid (20:5), as a highly polyunsaturated fatty acid, to study the effect of treatment on the lipidome pattern of cancerous cells. The obtained results provided a list of up-regulated and down-regulated lipids through a comparison between control versus treated cells. Method precision for the SPME approach was excellent (5-18% RSD) for all detected lipids. The relative LOD range was 0.5-1 ng/ml for the proposed SPME method, while for Bligh & Dyer, it was found to range between 0.05-0.1 ng/ml. Automated 96-blade sample handling enhanced extraction rates by approximately 2 min per sample, while generating comparable or enhanced product yields in comparison to conventional methods This study highlights important advantages of both SPME approaches using the rod fiber and thin-film geometries to capture fatty acids and lipids from different biological media including human and fish plasma as well as cell culture. The experimental results confirm the suitability of SPME for both in vitro and in vivo study in clinical samples as a new tool for lipidomic analysis.