Domestic Terrorism in the Canadian News Media: a Framing Analysis of Canadian-Connected Terrorism in 2013 Newspaper Articles 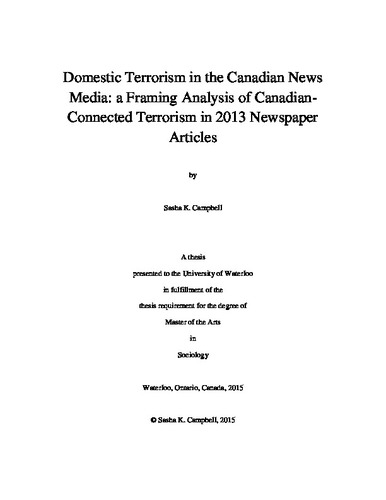 Terrorism is one of the most politically and rhetorically significant issues shaping the world today, and a popular topic in the news media. Canada is no exception. Recently, the problem of domestic (or homegrown) terror has emerged as a complex and emotionally potent phenomenon, one seemingly on the rise. However, there is an absence of media scholarship investigating this issue from a Canadian perspective. This study examines the Canadian news media’s treatment of Canadian-connected terrorism. Central to the journalistic discourse are frames, which serve to define, assess, characterize, moralize, and contextualize terrorism for readers. Frames provide narratives for key aspects such as alleged suspects, arrests, plots, police activities, and legal/political responses. A qualitative framing analysis approach is employed to identify and discuss news framing of Canadian-connected terrorism via extensive inductive coding of 173 Canadian news articles from print and online media sources, spanning January 1st – December 31st, 2013. Recurrent frames are established using evidence from the articles and discussed in terms of the messages they send about the nature of domestic terrorism/terrorists, their usefulness for understanding terrorism as a multifaceted global problem, and, where feasible, theoretically informed explanations for the use of specific frames. Findings indicate that the Canadian news media favours terrorism as a topic, but does not provide particularly informative articles. The reasons for this discrepancy proved varied, complex, and intimately linked with the way the mainstream news media – and other powerful organizations – operate and interact.