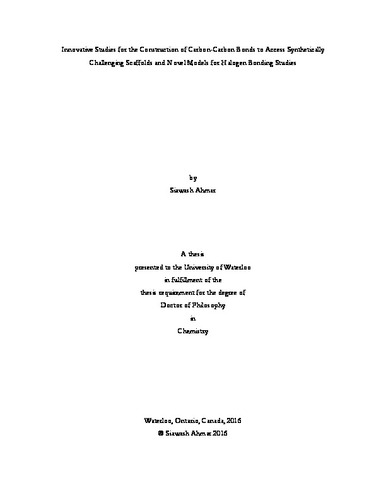 The formation of carbon-carbon bonds to access sterically challenging all-carbon quaternary centers still remains a synthetic challenge. Conjugate addition reactions have proven to be a very effective strategy for transferring alkyl and alkenyl groups to the electrophilic site of α,β-unsaturated compounds for the formation of quaternary centers; however, prior to the research described in Chapter one, no general strategies had been reported. The objective of my research was to address this void and develop a general and versatile conjugate alkynylation protocol that gives rise to propargylic quaternary centers. Chapter 1 disclosed two complementary protocols that were developed for the conjugate alkynylation of alkylidene Meldrum’s acids. The scope of both the nucleophilic acetylide and electrophile were examined. Chapter 2 focused on the Ag(I)-catalysed lactonization of propargylic Meldrum’s acid adducts, discussed in Chapter 1, that afforded complex γ-butyrolactones. Various other electrophilic reagents such as: halogens, PhSeBr, and transition metals were also screened for reactivity, but gave inferior results to Ag2CO3. Lactonization was sensitive to reaction conditions, particularly for internal alkynes, where E and Z isomers can be formed. In Chapter 3, an intramolecular Rh-catalyzed conjugate alkylation protocol was explored by preparing models that possessed a highly electrophilic site that was proximal to a carbon-metal bond which can undergo transmetallation. Tricarbastannatrane derivatives were the main focus as analogous tributylstannane substrates displayed regioselective transmetallation problems, and carbon-boron bonds showed no reactivity. Efforts to prepare models possessing the carabstannatrane group were thwarted by protodestannylation of the C–Sn bond. Additionally, due to the cost of tricabastannatranes, an in situ procedure starting from inexpensive starting material was found, albeit in low yields. Finally, in Chapter 4 solution and solid state studies of intramolecular halogen bonding interactions were investigated. A series of Meldrum’s acid models were prepared that carefully placed halogen bond donors and acceptors to allow for interactions to take place based on the results obtained from previous models. Though none of the models prepared displayed any intramolecular interactions, sufficient evidence for intermolecular interactions between halogen donor of one molecule and the acceptor on another molecule were observed.