The Problem with Too Much Fear: Testing the Interaction between Fear Appeals, Message Framing and Visual Metaphors 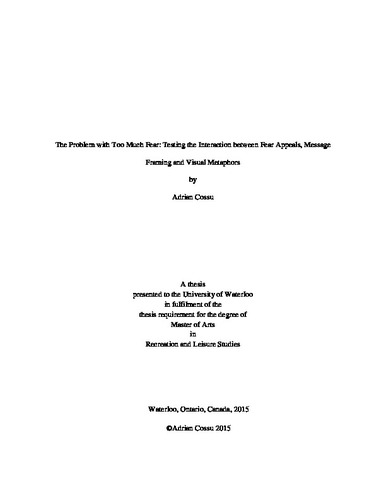 In Canada, recreational activities account for 60% of all drowning related deaths (LSS, 2012). How can we influence people to adopt safe behaviours while engaging in recreational activity around the water? One popular method for altering or maintaining behaviours is through the use of fear appeals. Unfortunately, such appeals can be problematic. If they create too fearful a response, they compromise their own efficacy. Humour has been promoted as one possible solution to mitigate theses effects (Mukherjee & Dubé, 2012). However, in many cases, humour may be inappropriate to use in combination with fear appeals. In response to this problem, this study turns to the use of visual metaphors. This study uses the Elaboration Likelihood model (ELM; Petty & Caccioppo, 1986) and Protection Motivation theory (PMT; Rogers, 1983) as a framework for understanding persuasive communication. It tests the relationship between fear, message framing, protection motivation and the use of visual metaphors. It was hypothesized that visual metaphors will function largely like the use of humour. In particular, visual metaphors will interact with high-fear and consequently lead to increased persuasion. Results suggest that those who reported being able to swim longer distances were less likely to intend to wear a life jacket [F(3,171)=5.17, p=0.002]. Regression suggested that two significant predictors help form intentions to wear a life jacket. Those who focused on barriers to wearing a life jacket formed weaker intentions to wear a life jacket. Also, those who reported consuming alcohol more frequently while boating were less likely to intend to wear a life jacket. Males and females differed significantly in many of their responses. Males (M=5.50, SD=1.70) were less likely to intend to wear a life jacket than females (M=4.50, SD=1.83); t(167)=3.50, p=0.001 . A possible explanation is males rated perceptions of severity and vulnerability as lower as well as rating response costs higher when compared to females. New Canadians (n=13) reported significantly lower scores for self-efficacy (M=5.48, SD= 1.18) than those who have lived in Canada for more than 10 years (M=6.17, SD=0.78); t(167)=-2.94, p=0.004. However, this study fell short of meaningful findings about visual metaphors and their interaction with fear appeals. Visual metaphors did not add a persuasive benefit and did not mitigate defensive responses which may be caused by excessive fear.

Adrian Cossu (2016). The Problem with Too Much Fear: Testing the Interaction between Fear Appeals, Message Framing and Visual Metaphors. UWSpace. http://hdl.handle.net/10012/10238