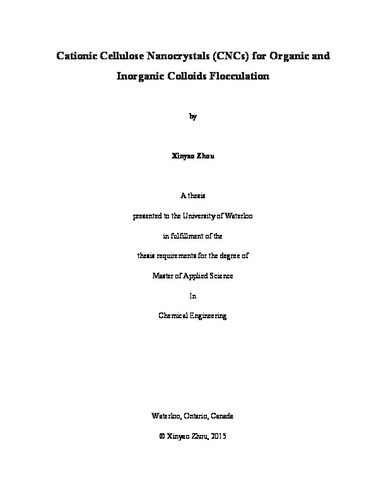 Cellulose nanocrystals were modified for use as novel flocculants by taking advantage of the extended cationic polymeric chains on CNCs. They were evaluated using both organic colloids and inorganic bentonite clay particles. For the flocculation of organic colloids, cellulose nanocrystals (CNCs) were grafted with N-N-(dimethylamino) ethyl methacrylate (DMAEMA), 4-vinylpyridine (4VP) and polyamine. The amine-g-CNCs displayed the best flocculation performance from the lowest optimal mixing ratio at pH=4 and wider flocculation window at pH=7. Bridging effect was more obvious for P4VP yielding relatively large flocs. The presence of carbonyl group of PDMA polymer chains promoted hydrogen bonding that contributed to aggregate latex particle in alkaline condition. For the inorganic clays, chitosan was utilized as natural polymer grafted onto CNCs. To enhance its water solubility, GTMAC were conjugated onto chitosan chains (G-chitosan) to produce the polymer flocculants. CNCs was firstly oxidized by sodium periodate to produce aldehyde groups, and G-Chitosan was grafted onto the aldehyde groups on CNCs to form novel polymer/nanoparticle, G-Chitosan/A-CNCs flocculants. For G-chitosan, the optimal dosages at pH 4 and 7 were 10 mg/L and 50 mg/L respectively. For the G-Chitosan/A-CNCs, the OD was 10 mg/L, 50 mg/L and 177 mg/L at pH 4, 7 and 10, respectively. The impact of the polymer was less significant when it was associated with CNCs particle. The role of CNCs in flocculants was related to its high aspect ratio and hydrophobic stiff backbone. Flocs parameters, such as size, shape and fractal dimension were further used to elucidate the significant of incorporating CNCs to the flocculants.