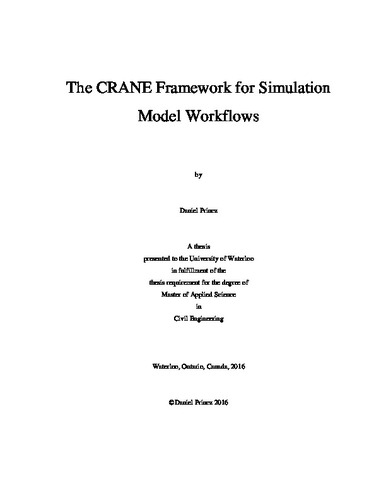 CRANE is presented as a flexible framework for linking simulation models and model support tools to form integrated modelling systems for engineering and scientific applications, evaluated using the scientific workflow approach. CRANE was written using an object-oriented programming language; the separation of its core processing component from its user interface; support for plugins that can be updated and enhanced independent of the framework; and with intuitive user-friendly features and human-readable configuration files. Its strength is its ability to connect to legacy simulation models, whose code cannot be modified, through structured and/or free-format text files. The framework contains an engine that interprets the requirements of simulation models and modelling support tools, and facilitates the flow of data between these components in a simulation workflow. In addition, a user interface provides a familiar graphic interface through which the engine can be configured and monitored during the evaluation of the simulation workflow. A case study was undertaken to demonstrate the ability of CRANE to wrap around, configure, and evaluate two versions of a hydrologic simulation model. Using the default parameter configuration, both versions of the model failed to capture the hydrologic regime of the basin; the modified version of the model only marginally improved the results by redistributing excess meltwater in a presumably more physically based way. The modified version of the model allowed excess meltwater to contribute to ponded storage and infiltrate into soil. By contrast, the original version of the model increased the evaporation rate to account for the excess meltwater. Given the poor overall performance of the model in this particular modelling scenario, the contribution of the modification could not be definitively commented upon. It was concluded that further assessment would be improved by better parameterization of the model. CRANE was used to configure the input files for the model, as well as to execute a simple simulation workflow. Unfortunately, the relative simplicity of the case study did not highlight the more advanced features of the framework. As this is a preliminary introduction of the framework, additional and different types of case studies are recommended, the results from which would identify areas where the framework can continue to be developed and enhanced.