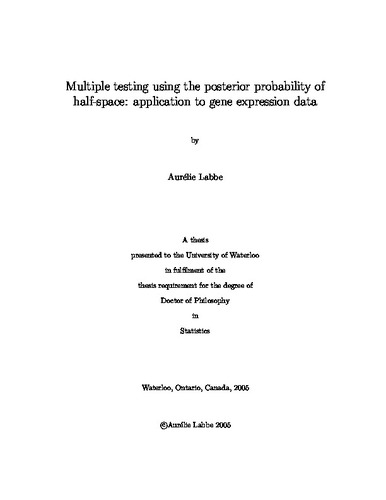 We consider the problem of testing the equality of two sample means, when the number of tests performed is large. Applying this problem to the context of gene expression data, our goal is to detect a set of genes differentially expressed under two treatments or two biological conditions. A null hypothesis of no difference in the gene expression under the two conditions is constructed. Since such a hypothesis is tested for each gene, it follows that thousands of tests are performed simultaneously, and multiple testing issues then arise. The aim of our research is to make a connection between Bayesian analysis and frequentist theory in the context of multiple comparisons by deriving some properties shared by both p-values and posterior probabilities. The ultimate goal of this work is to use the posterior probability of the one-sided alternative hypothesis (or equivalently, posterior probability of the half-space) in the same spirit as a p-value. We show for instance that such a Bayesian probability can be used as an input in some standard multiple testing procedures controlling for the False Discovery rate.