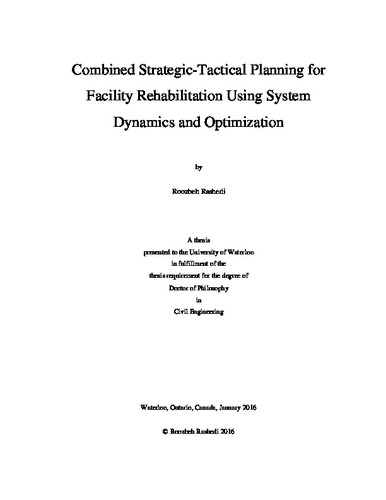 Rehabilitation programs are essential for efficiently managing large networks of infrastructure assets and sustaining their safety and operability. While numerous studies in the literature have focused on various aspects of infrastructure rehabilitation, such as rehabilitation processes, deterioration modeling, life cycle cost analysis, project financing, etc., limited efforts have investigated the overall dynamics among these functions and the development of holistic models that can analyze the long-term effect of different strategic policies and their impact on tactical rehabilitation decisions. To support strategic level of decision-making and long-term policy analysis, this research utilized System Dynamics (SD) to study the dynamic interactions among the deterioration, rehabilitation, and budgeting feedback loops. Model performance and suggested policies were also checked against reference modes and verified using various model testing methods to ensure adequacy. The proposed System Dynamics model was then expanded to incorporate four main modules including policy, physical condition, life cycle cost, and sustainability, for the purpose of backlog accumulation analysis. School building facilities were used as the focused asset domain of this study. After identification of key variables based on literature analysis, previous researches on school building facilitates, and experts’ opinion, the dynamic interactions were studied using causal loop diagraming (CLD) methods. The developed CLD was then mapped into a stock-and-flow simulation model incorporating the four integrated modules with all the underlying mathematical relationships. Numerous experiments with different policy scenarios were conducted to investigate the impact of various policies related to rehabilitation, budget distribution, government investment, and private financing. The simulation results clearly indicated that some of the commonly used policies such as condition-based prioritization methods can lead to significant long-term problems in terms of backlog, and showed that equal distribution of budget can be more effective. Simulation results also indicated that the use of private financing for backlog elimination need to be carefully analyzed to determine a proper payback scheme without a negative effect on long-term backlog projections. The SD Model was also adopted to provide optimum policy solutions in terms of the level of budget allocated to rehabilitation of exiting school buildings and construction of new facilities to accommodate future enrolment. The proposed model used facility condition index (FCI) as an industry standard to investigate facility performance and also a utilized a facility risk index (FRI) to account for the risk of failure. The model was used to investigate and compare the effect of using enrolment-based budgeting policies versus an optimized policy solution on a network of 438 elementary school buildings. Results clearly showed that the enrolment-based approach, which has been used by education ministries for a long time, could be significantly improved with the used of policy optimization. The policy solutions form the strategic-level analysis were used to create detailed tactical rehabilitation plans. To support the tactical level of decision-making this research investigated the performance of mathematical mixed integer programming and genetic algorithm (GA) optimization models to handle the large-scale tactical problems. First, various model formulations including an integer, a one-shot binary, and a year-by-year binary formulation were examined for their performance on large-scale problems. A year-by-year formulation was then selected for the network-level analysis and was used with GA-based optimization. To improve the performance of the GA-based model, a segmentation approach was used that was able to eliminate performance degradation, yet exhibited long processing time. Subsequently, an integer programming model was developed on the GAMS/CPLEX optimization tool that resulted in the best solution quality and fast processing time for very large-scale problems (e.g., 50,000 building components). The promising result of the proposed mathematical model was mainly attributed to the formulation of the optimization model, advancements in the used optimization tools, and the separation between project and network level analysis. Combination of the strategic and tactical models developed in this research provides a comprehensive and systematic framework for a combined analysis of rehabilitation plans at both strategic and tactical levels of facility management.