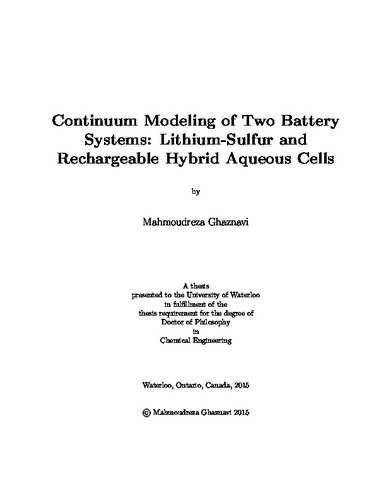 Mathematical models are powerful tools for understanding the mechanisms of a working battery. This thesis develops continuum mechanics models for two battery systems: lithium-sulfur (Li-S) and rechargeable hybrid aqueous battery (ReHAB). In both models, continuous partial differential equations and the Butler-Volmer equation are used to describe the diffusion/transfer of species in electrolyte and the electrochemical reactions at the electrode/electrolyte interface, respectively. The first part of the thesis deals with modeling of Li-S batteries. A mathematical model is presented and the kinetic parameters of the electrochemical reactions of polysulfides are found. Sensitivity analyses of the mathematical model are performed on different parameters, including the effects of discharge current, electronic conductivity of the cathode, precipitation rate constants, sulfur content, exchange current densities and cathode thickness. The sensitivity of the model to variations of these parameters over a wide range of values is investigated. In particular, we show that the discharge voltage profile of Li-S at low discharge current rates typically contains two plateaus, while at high current rates, the first voltage plateau disappears. Furthermore, it is demonstrated that the performance of Li-S batteries is a function of the ability of the electrolyte to dissolve elemental sulfur; the undissolved portion of elemental sulfur cannot take part in the reduction reactions, thereby causing capacity loss. On the other hand, if the reduced polysulfides do not precipitate, the accumulation of the products in the electrolyte solutions results in high concentration overvoltage and prevents further electrochemical reduction. Moreover, the charge process is also simulated. In order to charge the battery completely, the reduced polysulfides must rapidly dissolve back to the electrolyte to take part in oxidation reactions. The second part of thesis investigates the electrochemistry of the zinc anode in a zinc/LiMn2O4 aqueous battery. The possible electrochemical reactions on the anode are discussed in detail and a mathematical model is formulated accordingly, and the suitable kinetic parameters are also suggested. To the best of our knowledge, this is the first time that the reversible electrochemistry of zinc in a charge/discharge cycle is modeled. The model is then evaluated with experimental data. The complicated deposition and dissolution of zinc, along with side reactions such as hydrogen evolution and zinc-water reactions, are modeled by considering the electrochemical and physical reactions of the adsorbed species on the surface of the electrode, including hydrogen and zinc hydroxide compounds. Both models are based on the mass transfer theory governed by continuous diffusion equations with boundary conditions given by the dynamics of chemical/electrochemical reactions at the electrode-electrolyte interface. The details of the physicochemical processes in these two batteries are, however, different. For instance, in the Li-S battery, the dissolution of elemental sulfur and precipitation of lithium sulfides occur within the bulk of the electrolyte, and the electrochemical reactions of intermediate products (Li2Sx> 2) at the interface are critical processes. On the other hand, in the ReHAB, the dynamics of interfacially adsorbed species on the zinc determine the battery behavior during charge and discharge cycles. In spite of the similarities and differences between the two systems, the models nevertheless give much insight into the working mechanisms of the two batteries.