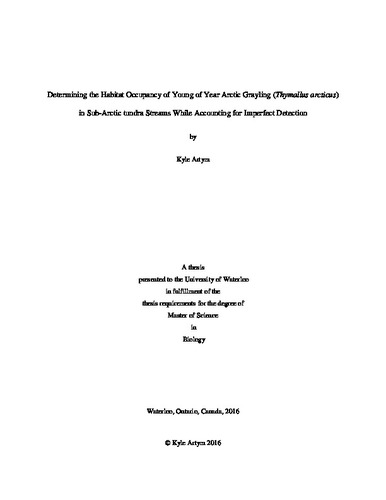 I developed multi-state, multi season occupancy models to determine how a number of interacting ecological variables influence the occurrence of young-of-year (YOY) Arctic Grayling (Thymallus arcticus) in nine streams on the sub-Arctic tundra. The model was developed and parameterized such that three different ‘states’ of occupancy were investigated (i.e., not occupied, somewhat occupied, and highly occupied), and temporal replication allowed me to account for uncertainty associated with imperfect detection; a common limitation of quantitative species-habitat-use studies. Depth and velocity decreased the probability of occupancy, and the effects were similar to previous Barrenland research. Stream Slope, Overhanging Cover, and Distance to Overwintering Habitat played a major role in explaining YOY Arctic Grayling habitat occupancy; while habitat complexity also was an important determinant. Electrofishing was more efficient at detecting YOY Arctic Grayling in somewhat occupied stream segments, while survey method is unimportant for detecting YOY in highly occupied stream segments. Also, detection efficiency varied between model seasons, and decreased with depth. By accounting for imperfect detection, my research improves the accuracy of occupancy estimates, and enhances our understanding of the habitat requirements of YOY Arctic Grayling in lake outlet streams of the sub-Arctic tundra. This should provide researchers and managers with a greater understanding of the habitats that YOY Arctic Grayling use, and enable researchers, resource managers, and regulators to track shifts in habitat use by YOY Arctic Grayling as climate change and growing industrial presence continue to shape the Canadian North.