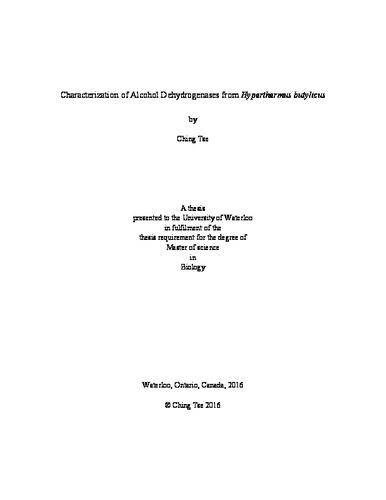 Hyperthermophiles grow optimally at 80 oC and above, and many of them use carbohydrates and peptides for their growth. Hyperthermus butylicus is a peptide-fermenting hyperthermophilic archaeon producing 1-butanol as an end-product. Alcohol dehydrogenase (ADH) is a key enzyme responsible for alcohol production, catalyzing the interconversion of alcohols and corresponding ketones or aldehydes. ADHs from hyperthermophiles are of great interests due to their thermostability, high activity and enantioselectivity. The pathway for 1-butanol production in H. butylicus is unknown. The aims of the study are to examine the metabolite end-products of H. butylicus and identify the ADH responsible for 1-butanol production. Metabolic end-products from H. butylicus culture were measured using High Performance Liquid Chromatography. It showed that in addition to 1-butanol there were other previously unreported end-products including acetone, 2-propanol, and butyrate, which are similar to those of Clostridium species. The production of 1-butanol suggests ADH is present in H. butylicus, however, the gene encoding the enzyme is unknown. From the H. butylicus genome sequence, the gene Hbut_0414 is the only gene annotated as zinc-containing ADH, but it was unclear if it would be the enzyme catalyzing the production of 1-butanol. The gene was cloned and overexpressed in Escherichia coli. The recombinant enzyme (ADH1) encoded by Hbut_0414 showed ADH activity with a wide range of substrates, and it was NAD(H)-specific and lost 50% of its activity when incubated at 60 oC for 3 hours. The ADH activity in the cell-free extract of H. butylicus was 1.4 U/mg and could use both NAD(H) and NADP(H) as a cofactor. This suggests there is another ADH (ADH2) present in H. butylicus but its gene is not annotated. The ADH2 was purified from the cell-free extract of H. butylicus and its protein sequence was identified using mass spectrometry. It was found to be encoded by a gene annotated as a hypothetical protein, which shared low sequence identities with other hyperthermophilic ADHs. The purified ADH2 was thermostable with a time of 25 hours for losing 50% of its activity at 95 oC. It had an apparent Km value of 0.59 mM and specificity constant kcat/Km of 13,559 s-1M-1 with butyraldehyde, which was the substrate with the highest catalytic activity examined. Its substrate specificity, enzyme kinetics, and thermostability suggest it is the ADH responsible for 1-butanol production in H. butylicus. The putative conserved motifs sites for NAD(P)+ and iron binding were identified using sequence alignment of ADHs from Crenarchaeota, suggesting ADH2 to be an iron-containing ADH.