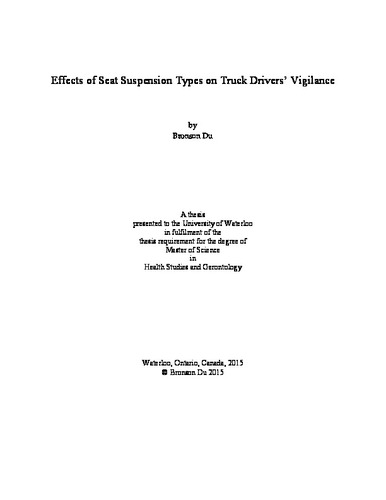 Background: Due to long work hours and irregular work schedules, truck drivers can become fatigued, which can increase the risk of traffic collisions. Further, professional truck drivers are at an increased risk for musculoskeletal problems such as low back pain due to prolonged sitting, poor posture and whole-body vibration (WBV). In particular, WBV has been shown to be correlated with many adverse health effects including headaches, sleeping problems and low back pain which may effect the drivers’ ability to remain vigilant on the driving task. The purpose of this study was to determine whether prolonged driving and different levels of WBV exposures affected truck drivers’ response times over a workday and workweek. The results of this study may be important in understanding how prolonged driving and WBV may affect driver performance in real life settings. Methods: This study used a repeated measures crossover design with 5 line-haul truck drivers (ages 43-64) who had a regular route typically lasting 10 hours a day. The first week (5 days) drivers operated their truck with their existing, air-suspension truck seat; then an electromagnetically active vibration-cancelling (EAVC) seat was installed, and the drivers operated their truck with the EAVC seat in the second week. Previous studies have shown the EAVC seats can reduce WBV exposure by 50% on average. For five days each week, each participant completed a questionnaire about their sleep, caffeine consumption, and discomfort and a 10-minute sustained reaction time task called the Psychomotor Vigilance Task (PVT) was performed immediately before and after their shift. The PVT characterized response times (RT) by the mean RT, inverse mean RT, 10% fastest and 10% slowest RT, variability of the RT and lapses, which are the number of responses greater than 500 ms. WBV exposures were also collected from the drivers’ seat using a tri-axial accelerometer. The average changes in PVT response times pre- and post-shift were calculated and compared using mixed model methods to determine whether response times increased over the workday as workweek, as well as whether there were differences between the two seating conditions. In addition, z-axis daily time weighted average A(8) WBV exposures were also calculated to verify that the WBV exposures were different between the two seats. Results: Four and five WBV measurements were completed on the existing and EAVC seats, respectively. There was a significant difference (p < 0.001) in A(8) WBV exposures between the existing and the EAVC seats with mean (standard error) z-axis exposures of 0.49 m/s2 (±0.03) and 0.22 m/s2 (±0.01). With respect to driver vigilance, out of 25 possible measurements, 20 pre-shift and 20 post-shift PVT were collected in the existing air suspension seating condition and 22 pre-shift and 22 post-shift PVT were collected in the EAVC seating condition. Regardless of the seat being used, degradation in PVT performance after the work shift was found in mean 1/RT and variability of RT. Further, there were significant degradations in PVT performance (increases in mean RT and fastest 10% RT) over the course of the workday with the existing seats but not the EAVC seats (p=0.47 and p=0.020, respectively). Discussion: The purpose of this study was to determine whether truck driving had any effect on RT and whether the RT may be influenced by reducing drivers’ exposure to WBV. The study results indicated increased RT after a full day of driving and that reducing drivers’ exposure to WBV may have a positive effect on RT, which may translate to lower risks of truck collisions. Five truck drivers represent a relatively small sample; so repeating this study on a larger scale is merited.