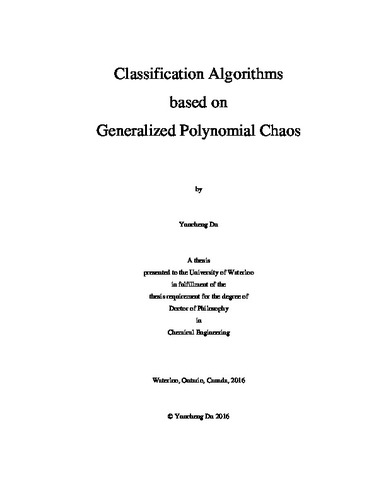 Classification is one of the most important tasks in process system engineering. Since most of the classification algorithms are generally based on mathematical models, they inseparably involve the quantification and propagation of model uncertainty onto the variables used for classification. Such uncertainty may originate from either a lack of knowledge of the underlying process or from the intrinsic time varying phenomena such as unmeasured disturbances and noise. Often, model uncertainty has been modeled in a probabilistic way and Monte Carlo (MC) type sampling methods have been the method of choice for quantifying the effects of uncertainty. However, MC methods may be computationally prohibitive especially for nonlinear complex systems and systems involving many variables. Alternatively, stochastic spectral methods such as the generalized polynomial chaos (gPC) expansion have emerged as a promising technique that can be used for uncertainty quantification and propagation. Such methods can approximate the stochastic variables by a truncated gPC series where the coefficients of these series can be calculated by Galerkin projection with the mathematical models describing the process. Following these steps, the gPC expansion based methods can converge much faster to a solution than MC type sampling based methods. Using the gPC based uncertainty quantification and propagation method, this current project focuses on the following three problems: (i) fault detection and diagnosis (FDD) in the presence of stochastic faults entering the system; (ii) simultaneous optimal tuning of a FDD algorithm and a feedback controller to enhance the detectability of faults while mitigating the closed loop process variability; (iii) classification of apoptotic cells versus normal cells using morphological features identified from a stochastic image segmentation algorithm in combination with machine learning techniques. The algorithms developed in this work are shown to be highly efficient in terms of computational time, improved fault diagnosis and accurate classification of apoptotic versus normal cells.