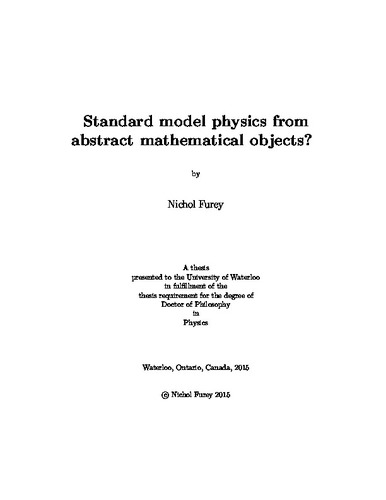 This thesis constitutes a first attempt to derive aspects of standard model particle physics from purely abstract mathematical objects. We begin abstractly with an algebra, and argue that physical concepts such as particles, causality, and irreversible time may emerge from the algebra acting on itself. We then focus on a special case by considering the algebra R⊗C⊗H⊗O, the tensor product of the only four normed division algebras over the real numbers. Using nothing more than R⊗C⊗H⊗O acting on itself, we set out to find standard model particle representations: a task which occupies the remainder of this text. From the C⊗H portion of the algebra, we find generalized ideals, and show that they describe concisely all of the Lorentz representations of the standard model. From the C⊗O portion of the algebra, we find minimal left ideals, and show that they mirror the behaviour of a generation of quarks and leptons under su(3)_c and u(1)_em. These unbroken symmetries, su(3)_c and u(1)_em, appear uniquely in this model as symmetries of the algebra's ladder operators. Electric charge, here, is seen to be simply a number operator for the system. We then combine the C⊗H and C⊗O portions of R⊗C⊗H⊗O, and focus on a leptonic subspace, so as to demonstrate a rudimentary electroweak model. Here, the underlying ladder operators are found to have a symmetry generated uniquely by su(2)_L and u(1)_Y. Furthermore, we find that this model yields a straightforward explanation as to why SU(2)_L acts only on left-handed states. We then make progress towards a three-generation model. The action of C⊗O on itself can be seen to generate a 64-complex-dimensional algebra, wherein we are able to identify generators of SU(3)_c. We apply these generators to the rest of the space, and find that it breaks down into the SU(3)_c representations of exactly three generations of quarks and leptons. Furthermore, we show that these three-generation results can be extended, so as to include U(1)_em charges.