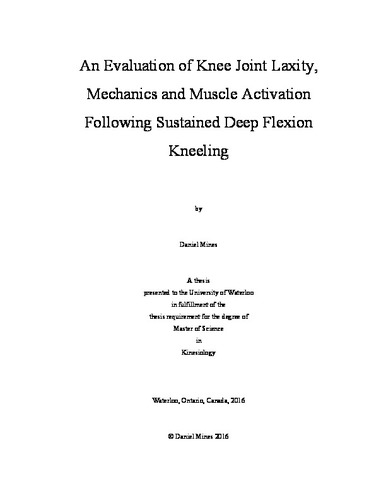 Knee osteoarthritis (OA) is a complex disease with several proposed mechanisms for both the initiation and progression of the disease. Within the next 30 years, 1 in 4 Canadians are expected to have OA and 30% of the workforce will have difficulty performing occupational activities due to OA. One at-risk group is workers whose occupations require frequent and intermittent kneeling: habitual kneelers. To better our understanding of how knee OA is initiated in this population, biomechanical studies are needed to support or refute current hypothesized pathways that link occupational kneeling to knee OA. It is well documented that frontal plane knee laxity changes throughout the progression of knee OA but it is not known whether laxity changes are a cause or a result of the disease. This thesis work explores a laxity mechanism for knee OA initiation in habitual kneelers. Study 1 aimed to reliably capture frontal plane knee joint laxity using an improved device. Ten healthy, young participants volunteered (5 males, 5 females). ICC scores ranged from 0.95 to 0.99 suggesting excellent reliability of the device. An MDD of 1.22˚ was calculated and used to inform laxity decisions in Study 2. Study 2 was novel as it was the first to determine what changes occur in passive frontal plane knee joint laxity - in addition to gait mechanics and muscle activation - following a kneeling exposure. Fifteen healthy, young participants volunteered (8 males, 7 females). Contrary to what was expected, frontal plane knee joint laxity did not change following the kneeling exposure. However, during gait, knee flexion angle at heel contact and peak knee flexion angle during early stance phase were both affected by the kneeling exposure. These findings link kneeling exposure to immediate changes in measures indicative of knee joint instability and altered loading that have the potential to damage knee joint cartilage. Thus, the findings support the epidemiological evidence of a higher risk of knee OA development in habitual workers, though likely through some other mechanism than increased frontal plane knee joint laxity.