Young Adult Experiences with a Mobile Smoking Cessation Application: A Qualitative Evaluation of Crush the Crave 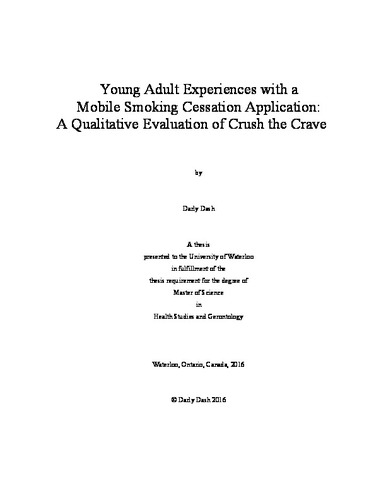 Canada has had tremendous success with reducing smoking prevalence among its population. However, the decline in rates is not observed equitably among various sub-populations and tobacco continues to cause preventable disease, disability, and death. Young adults have the highest smoking rate compared to all other age groups and many are interested in smoking cessation. Nonetheless, a challenge remains as many young adults perceive traditional smoking cessation resources negatively and prefer not to use pharmacotherapy, counselling, and/or quitline services. Not surprisingly, young adults are also the largest population group who utilize mobile technologies. Mobile applications (apps) are an emerging, tailored intervention that hold promise for health behaviour change. These are known as mobile health (mHealth) technologies. Currently, many applications for smoking cessation exist. However, little is known about Canadian young adults’ use and experiences with apps for smoking cessation. To address this research gap, this study evaluated Crush the Crave (CTC), an evidence-based smoking cessation app created specifically for young adults. Semi-structured qualitative interviews were conducted with 15 Canadian young-adult users of CTC in order to capture experiences and use of the app. Interviews lasted 70 minutes on average and were recorded, transcribed verbatim, and then subsequently analyzed using thematic analysis through NVivo 10 software. Results were presented by the following categories which encompassed various sub-themes: young adults’ reasons and experience with smoking, experiences with the use of alternate quitting resources, experiences with the features of CTC, and mechanisms associated with utilizing CTC. Across the interviews, participants found that the app provided an important tracking mechanism that gave the ability to self-monitor progress while quitting. Further, the app provided an important sense of control and was easily accessible by users when needed. However, participants discussed the need for constant reminders and that the constant need to access data or a Wi-Fi network in order to use the app was a barrier. Additionally, it was found that social support via social media was not used by participants as cessation experiences were considered to be private and individuals did not like to broadcast such details on social media. These findings demonstrate the need for continual research and improvement of mHealth technologies among the intended users. There is also a need for more flexible and dynamic apps that keep users engaged and provide a tailored experience. This thesis contributes to the limited literature on the usability of mHealth apps. Recommendations are discussed, followed by contributions, limitations, and future directions.