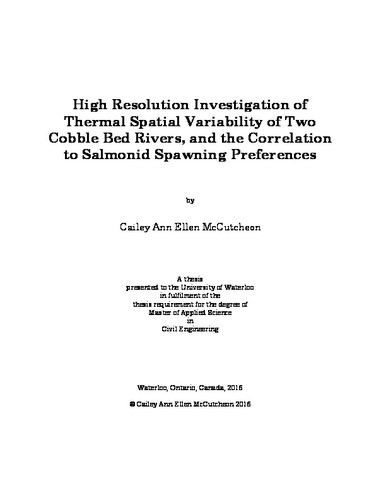 This thesis introduces and demonstrates the application of a recently designed mobile streambed temperature measurement system. The apparatus, called the High Resolution Temperature Mapping Device (henceforth HI-RES TMD) was built to increase the resolution of established temperature sampling methods and instantaneously acquire 32 equally distributed temperature measurements within 3 m2 (0.3 m grid spacing) at the streambed interface. Sampling is done under wadable flow conditions, and can be completed every 4-5 minutes. This allows sampling of any spatial extent such as full morphological units or the reach scale within hours or days respectively. The HI-RES TMD is able to overcome many of the short comings of previous sampling methods such as the range of investigation of a given study, or require the insertion of temperature probes into the substrate which considerably increased sampling time. The HI-RES TMD has been field tested in two mountain streams located along the western slope of the Rocky Mountains, in southeastern British Columbia, Canada to examine temporal repeatability of thermal streambed patterns. A dataset of more than 80,000 individual streambed temperature measurements was obtained using the HI-RES TMD. A series of analysis were then completed to determine whether the spatial variability of streambed temperature plays a role in the choice of spawning locations for fish. Both rivers are characterized by intense spawning of two salmonid species: cutthroat trout (oncorhynchus clarkia) and bull trout (salvelinus confluentus). This was confirmed during three consecutive seasons of spawning site surveys completed between 2012 and 2014 with the help of expert fisheries biologists at which time the precise locations of all the spawning locations (i.e., redds) within the study areas were surveyed. Analysis of streambed temperature patterns on the morphological features presented correlations between the average thermal distributions and spawning density and repeatability. Spatial autocorrelation analysis was completed to identify hot spots and cold spots within the study areas. It was found that bull trout redd density and repeatability were significantly correlated to the cold spots. As presence of colder areas on the streambed may be related to hyporheic flow or groundwater emergence, recommendations for improvements of the HI-RES TMD present an opportunity to determine if the bull trout redds are also correlated to groundwater emergence.