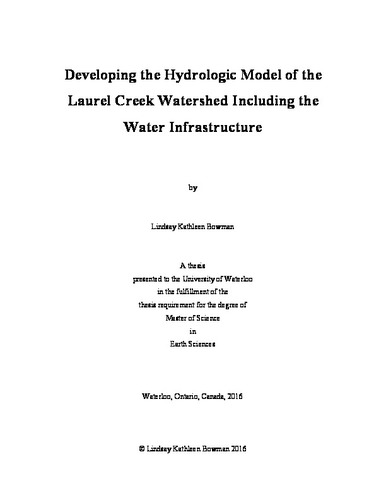 Continued growth of the Canadian economy has led to an increased population, which resulted in the progressive urbanization of Canada’s watersheds. Additionally, as infrastructure ages, an increasing percentage of drinking water is lost due to leakage from the distribution system. Conversely, groundwater infiltrates into sanitary sewer systems, which results in additional inflow to wastewater treatment plants and increased cost to consumers. Municipal infrastructure asset management is an essential tool to efficiently manage the water and wastewater distribution networks. To support asset management strategies for the City of Waterloo, the primary goal of this thesis was to create an integrated groundwater-surface water model for the Laurel Creek Watershed, with the inclusion of sanitary sewer infrastructure. Data was made available by the City of Waterloo, and a simplified version of the sanitary sewer network was created and added to the Laurel Creek Watershed model, which had been updated with a new digital elevation model, hydraulic conductivity field, land use files, and vegetation and evapotranspiration parameters. The model created in this thesis was constructed as a foundational prototype, and is intended for use as the basis of future work, which will include model enhancements and calibration. A 2-D mesh was created based on a 10 m DEM of the Laurel Creek Watershed. The mesh had 25 m spacing along the stream network, and 100 m spacing in all other areas. A 3-D mesh was created using the bedrock as the bottom layer, and the 10 m DEM as the top layer. The upper 22 layers were created based on the 10 m DEM and the bottom 17 layers were generated using the Waterloo Moraine model created by Sousa (2013). An additional layer was added to incorporate the sanitary sewer network in order to ensure the network had a continually decreasing elevation to allow for gravity drainage of the sanitary sewers. Four steady state simulations were created using HydroGeoSphere. Two simulations ran with 25% precipitation and no evapotranspiration, with one including the sanitary sewer infrastructure. The next two simulations ran with 100% precipitation and evapotranspiration, with one including the sanitary sewer infrastructure. The model results were also compared to measured stream flow data; a steady state model was compared to data collected over four years from 10 sites, and a transient model was compared to data from a 2014 storm event for five sites. While no calibration was conducted for the model, the steady state model produced results that were similar to the measured data. The transient model produced very high peak flows for storm events, but it is expected that model calibration would mitigate this. This thesis concludes that sewer infrastructure can be input into an integrated groundwater-surface water model using HydroGeoSphere, on the condition that it depends on the geometry of the 3-D mesh. It also resolves that the updated Laurel Creek Watershed model is able to simulate transient flows, though it must be calibrated in order to accurately represent measured stream flows.