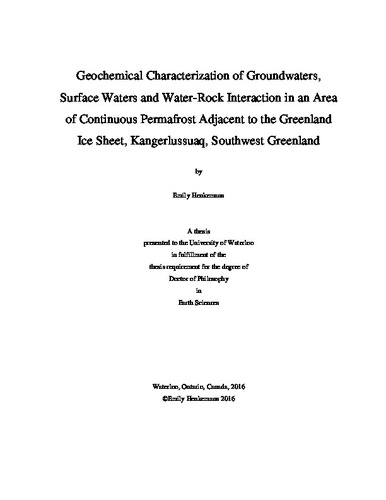 Continental scale glaciations, such as those that covered much of Canada and Northern Europe during the last glacial maximum (26,000 to 19,000 y BP), can be expected to cause large disturbances to both the surficial and subsurface environments. The Greenland Ice Sheet (GrIS) provides a modern, natural analogue for past continental scale glaciations, allowing the extent and nature of the impact on ground and surface waters in the vicinity of the ice sheet to be studied. Currently, geochemical and isotopic information concerning groundwater chemistry and movement adjacent to a continental scale ice sheet is very limited. In areas of continuous permafrost, available knowledge is based on springs, open pingos and fluids from underground openings such as mines. Properly instrumented boreholes can provide additional insight into geochemical processes affecting groundwaters in cryogenic environments next to ice sheets. As part of the Greenland Analogue Project (GAP), three deep, inclined boreholes were drilled in crystalline bedrock in the Kangerlussuaq Region of southwest Greenland and two of these were successfully instrumented with sampling systems: i) Borehole DH-GAP01 intercepting a talik beneath a lake located less than 2 km from the Greenland ice sheet; and ii) Borehole DH-GAP04 was completed adjacent to the ice sheet in order to sample groundwaters from the bedrock below the ice. Drill core from the GAP boreholes was used to study fracture mineralogy, matrix pore fluids and whole rock chemistry. Geochemical studies were conducted on the borehole groundwaters and aimed to determine the depth of meltwater penetration beneath the ice sheet and the relative impact of cryogenic processes such as in-situ freeze out versus water-rock interaction on groundwater salinity. Surface water studies, including lakes and meltwaters in the Kangerlussuaq region, were also undertaken. Understanding the role of taliks, unfrozen conduits through the permafrost, in the groundwater system was an important goal of both surface and groundwater studies. Groundwater discharge significant enough to impact lake chemistry was not observed in any of the lakes studied, suggesting little groundwater-surface water interaction occurs in the study area. Recharge conditions between lakes and the groundwater system could also be an ongoing process and therefore help explain the lack of observable groundwater discharge into lakes. Evaporation is a key process impacting surface water chemistry. Lakes had enriched δ¹⁸O/δ²H isotopic signatures and fall along local evaporation lines. Consistent with previous work (e.g. Blum & Erel, 1995) on increased biotite weathering in glaciated environments, ⁸⁷Sr/⁸⁶Sr isotopic ratios were found to be more radiogenic (>0.73) in lakes in more recently glaciated terrain. In more recently deglaciated areas, sulfide oxidation was the main source of sulfur (as sulfate) in lakes, while the influence of marine aerosols and bacterial sulfate reduction increased further away from the ice sheet around Søndre Strømfjord. Groundwater sampled beneath the margin of the ice sheet (DH-GAP04) had highly depleted isotopic signatures (δ¹⁸O -23.5 to -24.4‰), similar to values observed for some regional meltwaters (-23.4 to -30.5‰). Meltwater recharging beneath the ice evolves from dilute Ca, Na, K-HCO₃ type waters to the brackish Ca-Na-SO₄ waters observed in the DH-GAP04 borehole. Gypsum is found as a ubiquitous fracture and rock matrix infilling in some borehole sections and has an isotopic composition of 3.2 to 10.7‰(δ³⁴S-SO₄), 4.5 to 9.1‰ (δ¹⁸O-SO₄) and ⁸⁷Sr/⁸⁶Sr ratios of 0.7022 to 0.7093. Recharging meltwater interacts with gypsum resulting in groundwaters with SO₄²- concentrations up to 1880 mg/L and groundwaters had similar isotopic signatures to fracture infillings: δ³⁴S-SO₄ (4.5 to 5.0‰), δ¹⁸O-SO₄ (2.9 to 5.9‰) and ⁸⁷Sr/⁸⁶Sr (0.7033 to 0.7075). The origin of the gypsum is believed to be due to an older hydrothermal event and not related to solute exclusion during freezing of fracture and matrix fluids. The continued presence of such a soluble mineral phase suggest that ice sheet induced meltwater circulation has not disturbed large sections of the rock matrix porosity and parts of the groundwater system sufficiently to dissolve gypsum and activate gypsum sealed fractures. Isotopic evidence for bacterial sulfate reduction was not observed. Groundwater from the talik lake borehole had a more enriched isotopic signature (δ¹⁸O -21.6‰) than the deeper groundwaters obtained from DH-GAP04, reflecting mixing with evaporatively enriched surface water. Solute exclusion due to permafrost formation was not observed to impact groundwater or matrix porewater chemistry. A perennially flowing spring located at the front of nearby Leverett Glacier was found to be geochemically unique from the borehole groundwaters. The source of the spring water could not be confirmed but was isotopically enriched (average δ¹⁸O -18.5‰) relative to meltwaters and the borehole groundwaters. High abundances of rare earth elements in the spring waters suggest a higher temperature origin for the spring.