Games with Words: Textual Representation in the Wake of Graphical Realism in Videogames 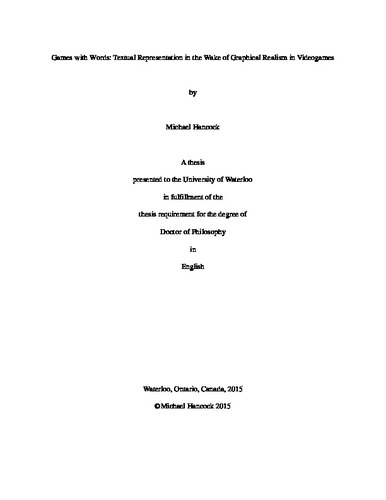 Much of the videogame industry is based around a model of technological progress, whereby developers, individual videogames, and videogame platforms are lauded as superior based on their engagement with the latest, cutting edge forms of technology. As a direct consequence of this focus, sophisticated graphic-based representations are often employed as a yardstick for technological superiority, as it is a form of advancement that can be discerned by the naked eye. The focus on graphics has a number of consequences: it presents past videogames as inferior realizations that pale before more modern approaches; it favors image-based representation over other representational forms such as text; it enters videogames into a broader, ongoing debate in Western culture regarding mimesis and representations of reality that pit image and text against each other. An alternative to the graphic-dominated history of videogames is a variantological approach, in which marginalized and past forms of representation are not seen as dead ends and failures, but as variants that offer alternative perspectives. To that end, this dissertation analyzes five different text-based variant approaches that present ways of considering videogames apart from the dominant narrative of technology-driven graphical realism. First, the history of the instruction manual illustrates how a text-based paratext functions in regards to videogames, which can be viewed as reinforcing the technology-driven approach to videogames—up to and including technology rendering the manual defunct—but can also illustrate a second history, one which explores how a manual as paratext acts to support videogames through incorporation of other print media forms such as the comic book or the picturebook, through presenting a model of the ideal gamer, and through presenting the manual itself as an object from within the videogame. Second, in the history of videogame technology, the 1980s are a crucial period, in which console systems developed an image-based vocabulary for nascent players to learn, and the text-based videogames of the personal computer looked to literary models to do what the image-based games could not; the 1989 Amiga game It Came From the Desert represents the moment when text and image cease to be competing forms and turn into formations more complementary. Third, in the 1990s, this balance shifts towards image with the advent of 3D immersive graphics, and the dominance of graphic-based realism, as illustrated through DOOM and Myst—though both games not only used text, but depended on it to engage players to enter into make-believe, mimetic games with their respective gameworlds. In the face of graphical realism’s dominance, the 1999 computer game Planescape: Torment stands out as a text-heavy variant, illustrating the ability of textual representation to engage with mimesis-as-make-believe and offer an alternative to graphical realism through self-inscription, the presentation of text, and a gameworld based on the power of belief and words. Finally, a fifth approach to textual variants comes through a consideration of the role of the text-centred artifact the book within videogames, which presents a wide variety of uses including the book as epitext, book as narrative frame, book as menu system, book as found object, and book as allusive structure.