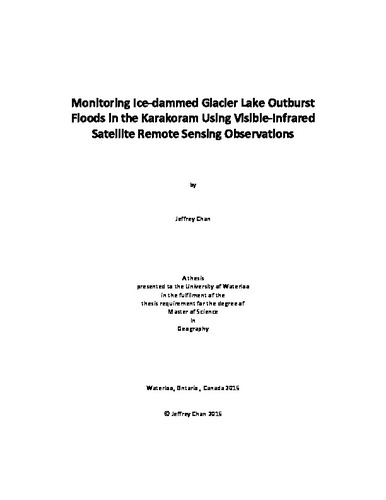 Glaciers are an important part of the hydrological cycle because they act as freshwater storage. Glacier ice contains about three-quarters of the world’s freshwater; supplying most of the base flow for rivers originating from high mountains (National Snow & Ice Data Centre, 2015). Glacial Lake Outburst Floods (GLOFs) are one of the common natural hazards in high mountain environments. The lack of a long term and regional GLOF monitoring program in the high mountain, has posed significant challenges in understanding the relationship between glacier mechanics and GLOFs in a changing climate. Remote sensing observations from space offer a promising alternative to reduce the number of in situ field surveys used to monitor glaciers and GLOFs. This thesis contextualizes the physical characteristics and hydrological, climatological, and societal importance of the Karakoram glaciers. Various approaches in GLOF monitoring and modelling are discussed in detail. The resulting objective of this research is to assess the practicality of modeling ice-dammed GLOFs using visible-infrared satellite observations and digital elevation models (DEM) available in the public domain. Kyagar Lake, Lake Virjerab, and the historical 1929 Chong Khumdan event are identified as case studies based on previous GLOF events in the Karakoram. Cloud-free satellite images between 1975 and 2015 were retrieved from the Landsat 2-8 archive. Lake extent isolation was performed using an object-based feature extraction and lake volume was estimated by integrating the feature extraction results with a DEM. GLOF magnitudes were estimated using the Clague and Mathews (1973) empirical model and the Walder and Costa (1996) semi-physical model. Model estimates were compared with limited observation data of flood discharge and lake volumes to evaluate the model performance. This research confirms the practicality of using satellite remote sensing observations to monitor GLOFs through the case studies and historical GLOF reconstruction. The results suggest that further research on integrating radar satellite observation, high resolution DEMs, and a continuous record of river discharge data in the Karakoram mountains, would provide a better understanding of the GLOF dynamics. Multiple upcoming Earth observation satellite missions and the accumulation of current Earth observation data would make possible a long-term and regional scale GLOF monitoring program.