Scripting Resistance: Governance through Theatre of the Oppressed 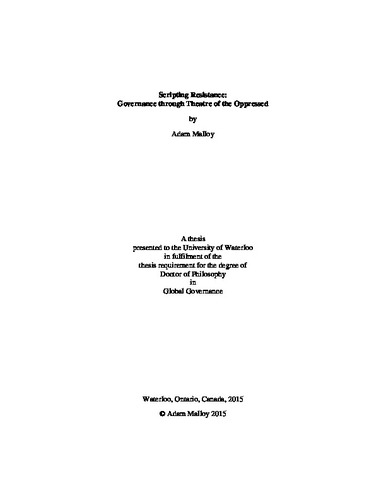 Theatre of the oppressed (TO) emerged out of a rights-repressive context to challenge the way cultural institutions are created and reproduced, and to enact alternative social and political relationships. More than a form of art, it is an interactive medium of communication, used by communities to engage in critical analysis of social, political, economic and ecological relationships. Rooted in the foundational principles of Paulo Freire’s (2005 [1970]) Pedagogy of the Oppressed, its purpose is to “humanize” relationships by identifying and deconstructing the many and complex ways in which some people are subordinated to others. Its theatrical mechanisms (improvised role play, for example) turn contextual analysis into praxis, recreating oppressive scenarios, and enacting alternative outcomes. As such it becomes a “rehearsal for reality,” generating the critical knowledge needed for oppressed people to confront their subordination, backed by the solidarity of their community. This research is an examination of the ways in which TO practitioners and communities envision and enact alternative social relationships, thereby embodying the emancipatory potential of human rights theory. I caution that not all theatre of the oppressed is equally emancipatory, but where it meets its liberatory potential, participants manifest an empowering embodiment of cultural resistance in four ways: 1. Theatre of the oppressed practitioners engage with communities in processes of intentional praxis, equipping participants with the skills for critical social analysis. 2. Practitioners are developing a provocative meshwork of solidarity to collectively resist the subordinating effects of disparate cultural power. 3. Theatre of the oppressed communities construct an emancipatory discourse which resonates among socially diverse and politically disparate groups around the world. I propose that theirs is a manifestation of counterhegemonic globalization. 4. Theatre of the oppressed participants reorient their ontologies, and decolonize their epistemologies. By negotiating the terms of co-existence in innovative ways, they bridge the gap between human rights theory and practice. Participants in theatre of the oppressed activities collectively challenge and redefine the norms which dominate cultural and political institutions. As such, their work embodies a promising demonstration of how those who are oppressed can change the way they understand and enact their political actions.