Hydrology of a Constructed Fen Watershed in a Post-mined Landscape in the Athabasca Oil Sands Region, Alberta, Canada 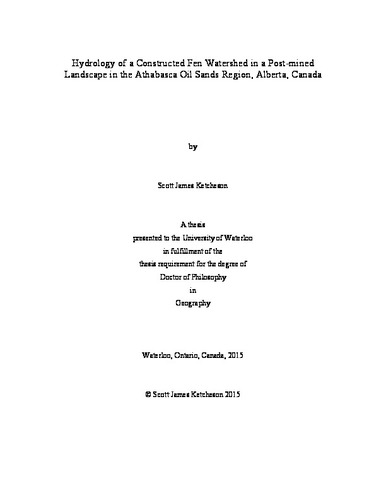 Peatlands (i.e., wetlands with organic soil) cover approximately 12% of Canada’s total land area, 18% of Alberta’s land base and nearly half of the landscape in Canada’s Western Boreal Plain. Some of these peatlands overlay vast fossil fuel resources. Mounting pressure from resource extraction industries is impacting an increasing proportion of peatland ecosystems in Canada. In Alberta, approximately 4800 km2 of the Athabasca Oil Sands Region near Fort McMurray has been deemed suitable for surface mining, which involves the removal of large expanses of undisturbed peatlands to access the oil sands beneath. The concept of peatland creation has been adapted into the Canadian regulatory framework and fen peatlands have now been constructed in post-mined oil sands landscapes. However, there is little information with respect to the nature of the hydrological processes that operate within constructed fen ecosystems and their associated watersheds and this concept is only now being tested in the field. Oil sands reclamation requires the reconstruction of entire landforms and drainage systems. The hydrological regime of reclaimed landscapes will be a manifestation of the processes operating within the individual landforms that comprise it. Hydrology is the most important process regulating wetland function and development, as it exhibits a strong control on the chemical and biotic processes operating in peatlands. Accordingly, this research aims to tackle the growing and immediate need to understand the hydrological processes that operate within reconstructed landscapes. The approach is to couple the controls on water distribution, storage and release within several reclaimed landforms (reclaimed slopes, tailings sand upland aquifer and fen peatland) to the function of a constructed fen watershed (the Nikanotee Fen watershed). A comparison of two constructed fen ecosystems with fundamentally different conceptual approaches provides the framework for examination of the key challenges and opportunities associated with fen creation in an oil sands reclamation setting. Although the focus of this work is on the hydrological processes, issues related to both water quantity and quality are identified as major challenges for fen creation. An adaptive approach to fen creation is recommended, in which the knowledge developed in concurrent research should be assimilated with the available longer-term information. The multi-faceted complexities associated with the ability to deem fen creation projects a success within the context of oil sands reclamation are also explored. The suggestion from this discourse was that success should be measured by the ability to design and construct systems that exhibit predictable and desirable characteristics. The distribution, ablation and fate of snowmelt waters were quantified for the constructed watershed, which addresses a lack of understanding of snowmelt dynamics within reclaimed landscapes. Results indicated that the snowmelt period hydrology within recently constructed landscapes is fundamentally different from that reported for natural settings. Reclaimed slopes represented large stores of over-winter precipitation and generated substantial surface runoff during the snowmelt period. This research demonstrates that snow dynamics must be incorporated into the design of landscape-scale constructed ecosystems. The dominant controls on the soil water regimes and runoff generation mechanisms on two reclaimed slopes (reclaimed five years apart) within the Nikanotee Fen watershed were also investigated during the snow-free period. The contrasting hydrological regime exhibited by these slopes suggests that changes in the hydrophysical properties of reclamation materials following construction could result in a shift in the hydrological role of reclaimed slopes at the watershed scale. It appears that, over time, recently reclaimed slopes should produce less overland flow and shift from water conveyors to water storage features in constructed watershed systems. Finally, the water fluxes within the Nikanotee Fen – upland system were evaluated for the first two years following construction (2013 - 2014). The hydrological performance of the constructed system was assessed and discussed within the context of the construction-level design. It was determined that the system design was capable of sustaining wet conditions within the Nikanotee Fen during the snow-free period in 2013 and 2014, with persistent ponded water in some areas. Evapotranspiration dominated the water fluxes from the system. These losses were partially offset by groundwater discharge from the upland aquifer, which demonstrated strong hydrologic connectivity with the fen in spite of most construction materials having lower than targeted saturated hydraulic conductivities. However, the variable surface infiltration rates and thick placement of a soil-capping layer constrained recharge to the upland aquifer, which remained below designed water contents in much of the upland. These studies comprise one of the most comprehensive hydrological evaluations of a constructed fen peatland watershed to date. The findings of this research indicate that it is possible to engineer the post-mining landscape to accommodate the hydrological functions of a fen peatland. Several recommendations are made to help guide the construction of future fen peatlands, which should be done at the commercial-scale. Research priorities include understanding the storage and release of water within coarse-grained reclaimed landforms as well as evaluating the relative importance of external water sources and internal water conservation mechanisms for the viability of fen ecosystems over the longer-term. The novel, catchment-scale approach to reclamation research presented within this thesis provides an integrated understanding of the hydrological functioning of constructed watersheds, and a similar approach is recommended for future research in reclaimed landscapes.