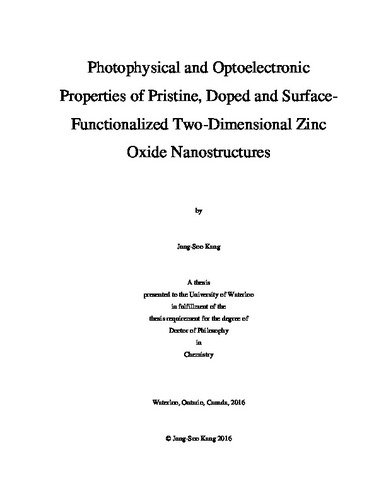 As one of the most studied transparent conducting oxides, zinc oxide (ZnO) has received a lot of attention due to its physical, chemical, optical and optoelectronic properties. The present study focusses on the photophysical and optoelectronic properties of ZnO nanostructures, specifically two-dimensional nanostructures. Three types of experiments that involve (a) controlling the size of ZnO nanostructures, (b) inducing impurities into ZnO nanostructures, and (c) surface functionalization by lanthanoid/organic complexes were performed. It is well known that the thickness has a great influence on the properties of nanostructures. Single-unit-cell thick (0.52 nm), n-type ZnO quantum sheets have been deposited on a p-type Si(100) substrate in an aqueous solution at low temperature (near 0 °C) by a facile electrochemical method without any pre- and post-treatment. Due to the extremely small thickness of ZnO quantum sheets, the quantum confinement effect was found to increase the energy band gap to 4.51 eV, more than 1.1 eV higher than its bulk value. These ZnO quantum sheets were found to produce deep UV (276 nm) and blue photoluminescence emission bands, which enabled qualitative description of the electronic band structure under the influence of quantum confinement effect. Increasing the deposition time caused individual quantum sheets grown in the [100] direction to stack onto one another rather than becoming thicker. This ZnO stacked quantum sheets provided a tunable band gap for this new type of ultrathin two-dimensional nanomaterials that promise new nanoelectronic applications. With the goal to obtain better optical and optoelectronic properties for light emitting diodes and photodetectors, rare earth transition metal ions, specifically trivalent europium and terbium cations, were embedded into ZnO nanostructures. Europium-doped ZnO nanowall structures have also been achieved by a simple electrochemical deposition method. Upon Eu(III) embedment, the nanowalls were found to become thicker and stacked. X-ray photoelectron spectroscopic study revealed that Zn(OH)2 was more dominant than ZnO near the surface and the depth-profiling data confirmed that Eu(III) was uniformly distributed in the ZnO-Zn(OH)2 core-shell structure. We also measured and compared the photoluminescence spectra of as-grown, post-annealed, and 1,10-phenanthroline surface-functionalized europium-doped ZnO nanowalls. Thermal treatment and surface functionalization of europium-doped ZnO generated hypersensitive 620 nm emission (5D0 → 7F2), which led us to propose a unique cascade energy transfer mechanism between ZnO, 1,10-phenanthroline and Eu(III) ion. Hypersensitive green emission at 545 nm (5D4 → 7F5) was also observed in ZnO nanowalls embedded with the trivalent terbium cations without any post-growth treatment. Photoluminescence emission of terbium was further found to increase up to 10 times by plasmonic effect introduced by surface functionalization with noble-metal nanoparticles. The Tb emission was examined for potential chemosensor application for Rhodamine B by a plausible cascade energy transfer mechanism from ZnO to Rhodamine B via trivalent terbium cations. In order to modify photophysical properties of ZnO, europium and terbium complexes based on oxydiacetic acid and 1,10-phenanthroline were synthesized and used to surface-functionalize ZnO nanowalls. Excitation spectra showed energy transfer between the rare-earth transitional metal organic complexes and ZnO. These two different types of hybrid complexes exhibited maximum energy transfer efficiency of up to 90%. X-ray photoelectron spectroscopy revealed the chemisorption nature between lanthanoid complexes and ZnO. These data also confirmed that the coordination nature of lanthanoid cations remained unchanged from that in pristine powders. This study provides unique opportunities to understand the interactions between metal oxides and chelating organic molecules. In this thesis, two-dimensional ZnO nanostructures, particularly nanowalls and quantum sheets, were synthesized by adopting an aqueous solution based electrochemical deposition technique. Single-unit-cell thick ZnO quantum sheets were successfully grown on a Si wafer, and they exhibited properties under quantum-confinement effects, including strong blue-shift of luminescence bands and dramatically widening of the energy band gap. Extensive photophysical investigation of trivalent europium cation embedment led to the development of new cascade energy transfer mechanism between europium cations and ZnO. Terbium-doped ZnO nanowalls produced characteristic emissions without any pre- or post-growth treatment, and they demonstrated chemosensing capability. Surface functionalization of ZnO nanowalls with lanthanoid complexes suggested a convenient way to modify the emission properties of ZnO, which provided insight into interactions between ZnO nanostructures and organic molecules. The present thesis therefore offered better understanding of not only optoelectronic and photophysical properties of transparent conducting semiconductors under quantum confinement in one direction, but also the effect of the dopant and surface functionalization on modifying the photophysical properties. These results could provide a new approach to design appropriate photophysical properties of other metal oxides for chemosensing and light emitting electronics.