Re-imagining the Compound: Regeneration of Block Urbanism in Seoul 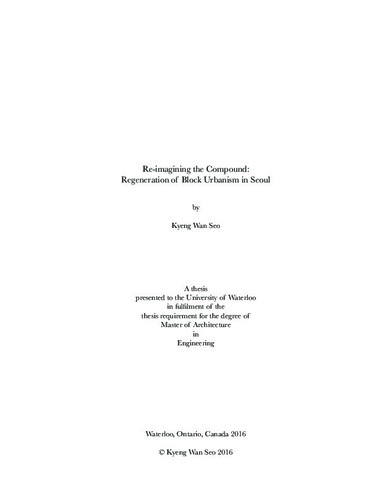 South Korea is a country where the national landscape is dominated by endless horizon of high-rise apartment blocks. This is especially true in the capital city of Seoul, where about half of the country’s population currently reside1. These apartments were built during the post-Korean War era of explosive economic and population growth and answered the needs of the emerging middle class, who desired a convenient and modern living above all else. The key characteristic of apartments in South Korea is that they are designed to function as a compound, following the planning model of Clarence Perry’s Neighbourhood Unit. Such spatial organization demarcated a new territory of the middle class economically, socially, and spatially. By the 1980s, apartments had become a symbol of status and wealth, and housing a mere commodity for capitalistic gain. According to Statistics Korea, more than half of country’s population now live in these apartments as of 20152. With new apartment compounds still sprouting throughout the country, this block urbanism is spreading at full force even after six decades after its first introduction. Such proliferation raises an urgent question: how can the city function if a single, homogeneous and inflexible typology that only serves a specific socio-economic layer of the society completely dominates its landscape? The problem is exacerbated as South Korea is experiencing a substantial demographic shift with one of the lowest birth rates in the world as well as a rapidly aging population. As the apartment blocks are mostly designed for a middle class family of four and built with a rigid concrete box frame structure, they are physically unable to respond to this change in demographic in their current form. As the block urbanism is still prevalent not only in South Korea, but also in the Eastern Hemisphere, re-imagining these blocks is paramount to the global discussion regarding the future of our cities. How can the architecture and urban design of block urbanism be adapted to meet the shifting needs of the time while breaking down the inherent economical, social, and spatial barrier? The thesis explores both the social and spatial challenges of apartment compounds and proposes a series of design schemes of different spatial qualities, re-imagining the compound as a diverse, inclusive, and responsive neighbourhood.