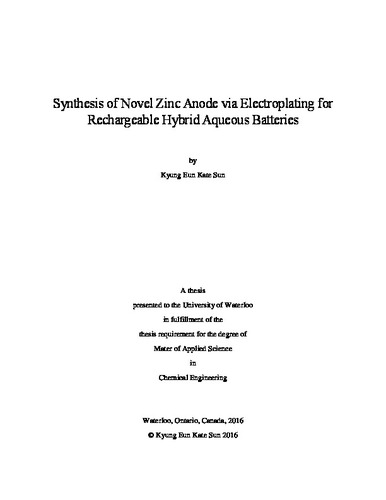 With the rise of the environmental concerns from combustion of fossil fuels, the demand for the alternative clean energy sources has increased. One of the alternatives is rechargeable batteries. Among many types of rechargeable batteries, lithium-ion batteries have been the most promising due to the high energy density and long lifespan. The current lithium-ion batteries, however, hold a drawback as they utilize organic electrolytes. The use of organic electrolytes not only raises safety and environmental concerns, but also results in a higher manufacturing cost than would be with aqueous electrolytes. Therefore, these issues can be solved by replacing the organic electrolytes with aqueous electrolytes. Among the many types of lithium-ion batteries with aqueous electrolytes, Rechargeable Hybrid Aqueous Battery (ReHAB) was selected in this project. ReHAB utilizes lithium manganese oxide (LiMn2O4) as the cathode and zinc as the anode. LiMn2O4 is a good candidate because tightly bounded lithium ions make LiMn2O4 stable in air and water. Also, it shows a small volume variation between lithiated and non-lithiated states. Zinc metal was chosen because of its low redox potential, good reversibility, high over-potential for hydrogen evolution in acidic environment, large specific capacity, good corrosion resistance, and cost effectiveness. While ReHAB is free of the problems posed by organic electrolytes in traditional Li-ion batteries, the current ReHAB technology must be improved to perform competitively in market. More specifically regarding the zinc anode, there are issues of corrosion, dendrite formation, and hydrogen evolution. Therefore, the goal of this project was to synthesize novel zinc anodes via electroplating with additives (organic and inorganic) reported in literature to mitigate issues of corrosion, dendrite formation, and hydrogen evolution (side reactions). The selected organic additives were cetyl trimethylammonium bromide (CTAB), sodium dodecyle sulfate (SDS), polyethylene glycol 8000 (PEG), and thiourea; and the inorganic additives were indium (II) sulfate, tin (IV) oxide, and boric acid. Each anode was characterized by the following measurements to rate its performance: float current, corrosion current, cyclability, x-ray diffraction, and scanning electron microscope. All the anodes created with the inorganic and almost all with the organic additives performed better than the commercial zinc anode. Among the organic additives tested, Zn-SDS performed the best, with the lowest float current and corrosion current measurements and the highest retention of 79% at the end of its 1000th cycle. Among the inorganic additives tested, each fared very similarity, with similar float current and corrosion rate, and retaining in average 78% of the initial discharge capacity at the end of 1000th cycle. Between the organic and inorganic additives, however, the XRD results suggested that in general the zinc deposition efficiencies may be lower for inorganic additives (and thus less favourable when scaling up for commercial production). If the lower current efficiency of inorganic additives (hinted by the XRD results) is verified to be true, then the organic additives that either performed better than or as well as the inorganic additives would be the better choice for the next generation of ReHAB.