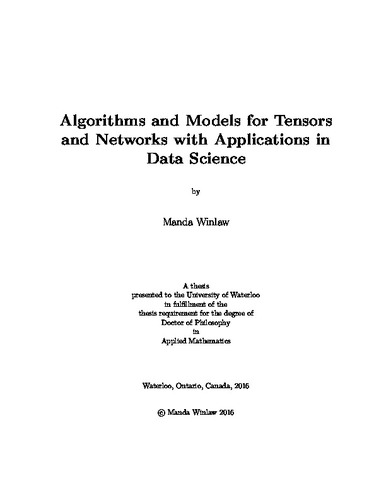 Big data plays an increasingly central role in many areas of research including optimization and network modeling. We consider problems applicable to large datasets within these two branches of research. We begin by presenting a nonlinearly preconditioned nonlinear conjugate gradient (PNCG) algorithm to increase the convergence speed of iterative unconstrained optimization methods. We provide a concise overview of several PNCG variants and their properties and obtain a new convergence result for one of the PNCG variants under suitable conditions. We then use the PNCG algorithm to solve two different problems: computing the rank-R canonical tensor decomposition and finding the solution to a latent factor model where latent factor models are often used as important building blocks in many practical recommendation systems. For both problems, the alternating least squares (ALS) algorithm is typically used to find a solution and as such we consider it as a nonlinear preconditioner. Note that the ALS algorithm can be viewed as a nonlinear preconditioner for the NCG algorithm or alternatively, NCG can be viewed as an acceleration process for ALS. We demonstrate numerically that the convergence acceleration mechanism in PNCG often leads to important pay-offs for difficult tensor decomposition problems, with convergence that is significantly faster and more robust than for the stand-alone NCG or ALS algorithms. As well, we show numerically that the PNCG algorithm requires many fewer iterations and less time to reach desired ranking accuracies than stand-alone ALS in solving latent factor models. We next turn to problems within the field of network or graph modeling. A network is a collection of points joined together by lines and networks are used in a broad variety of fields to represent connections between objects. Many large real-world networks share similar properties which has garnered considerable interest in developing models that can replicate these properties. We begin our discussion of graph models by closely examining the Chung-Lu model. The Chung-Lu model is a very simple model where by design the expected degree sequence of a graph generated by the model is equal to a user-supplied degree sequence. We explore what happens both theoretically and numerically when simple changes are made to the model and when the model assumptions are violated. As well, we consider an algorithm used to generate instances of the Chung-Lu model that is designed to be faster than the traditional algorithm but find that it only generates instances of an approximate Chung-Lu model. We explore the properties of this approximate model under a variety of conditions and examine how different the expected degree sequence is from the user-supplied degree sequence. We also explore several ways of improving this approximate model to reduce the approximation error in the expected degree sequence and note that when the assumptions of the original model are violated this error remains very large. We next design a new graph generator to match the community structure found in real-world networks as measured using the clustering coefficient and assortativity coefficient. Our graph generator uses information generated from a clustering algorithm run on the original network to build a synthetic network. Using several real-world networks, we test our algorithm numerically by creating a synthetic network and then comparing the properties to the real network properties as well as to the properties of another popular graph generator, BTER, developed by Seshadhri, Kolda and Pinar. Our graph generator does well at preserving the clustering coefficient and typically outperforms BTER in matching the assortativity coefficient, particularly when the assortativity coefficient is negative.

Manda Winlaw (2016). Algorithms and Models for Tensors and Networks with Applications in Data Science. UWSpace. http://hdl.handle.net/10012/10158