Modeling, Analysis and Optimization of the Gas-Phase Methanol Synthesis Process 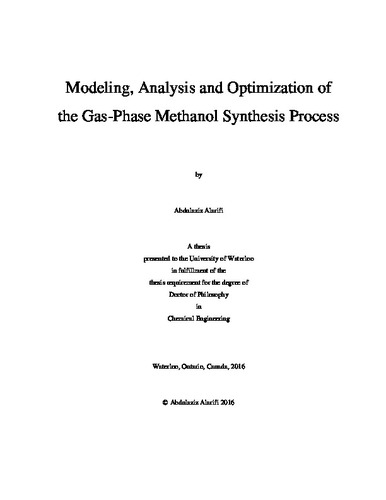 Methanol synthesis has been the subject of many improvements over the last decades since it became more cost effective and scalable than earlier high pressure technology. The synthesis of methanol from syngas has conventionally been carried out in adiabatic quench-type reactor in the gas phase where the only way to moderate the temperature is to inject shots of syngas at various position of the rector. However, because of the highly exothermic behavior of methanol synthesis reactions, the dissipation of heat has been a bottle-neck in the reactor design, and reactor configurations have a tendency to be complicated. This dissertation is divided into three parts presents a mathematical model of double-tube methanol reactor which was developed through cooperation between Mitsubishi Heavy Industries (MHI) and Mitsubishi Gas Company (MGC), methanol synthesis process flowsheet was developed and fully integrated with the Genetic Algorithms that generated a set of optimal operating conditions with respect to upper and lower limits and several constraints, and a dynamic optimization approaches to derive the ideal operating conditions for a Lurgi type reactor in the presence of catalyst deactivation. The first part of dissertation concentrates on the Mitsubishi Methanol “superconverter” which has a design capability to efficiently remove the heat generated by the exothermic reactions in methanol synthesis and improves methanol production by at least 3% more than the conventional single-tube converter. This converter is operated under milder conditions, especially at the end of the reactor, allows the catalyst to last for a longer period. This leads to process intensification and allows for the use of a compact distillation step. In addition, this new design has the advantage of preheating the feed gas to the reactor by having the inner tubes replace the feed gas preheater. The predicted methanol concentration and temperature profiles indicate that an increase in temperature is accompanied with a reduction in the methanol equilibrium concentration and hence limiting the profitability in the industrial plant. The use of a double-tube reactor is shown to be able to overcome this limitation. The novelty lies in a process modification which employs an inner tube that is disposed in the reactor and then the catalyst is charged into a circular space surrounded by the reaction tube on one side and inner tube on the other side. Simulation studies show that this design allows the temperature to increase gradually and, hence, delays the equilibrium to be reached to the end of the reactor. In other words, more methanol is produced and less byproducts. The second part of the dissertation concentrates on a multi-objective optimization applied for the operating conditions of the methanol synthesis loop via a multi-stage fixed bed adiabatic reactor system with an additional inter-stage CO2 quenching stream to maximize methanol production while reducing CO2 emissions. The model prediction for the methanol synthesis loop at steady state showed good agreement against data from an existing commercial plant. Later, the process flowsheet was developed and fully integrated with the Genetic Algorithms Toolbox that generated a set of optimal operating conditions with respect to limits and linear constraints. The results showed methanol production was improved by injecting shots of carbon dioxide recovered from the reformer at various reactor locations. The third part of the dissertation concentrates on a dynamic optimization approach derived the ideal operating conditions for a Lurgi-type methanol reactor in the presence of catalyst deactivation are proposed to determine the optimal use of recycle ratio of CO2 and shell coolant temperature without violating any process constraints. This study proposes a new approach based on a hybrid algorithm combining genetic algorithm (GA) and generalized pattern search (GPS) derivative-free methodologies to provide a sufficiently good solution to this dynamic optimization problem. The hybrid GA-GPS algorithm has the advantage of sequentially combining GA and GPS logics; while GA, as the most popular evolutionary algorithm, effectively explore the landscape of the fitness function and identify promising areas of the search space, GPS efficiently search existing basins in order to find an approximately optimal solution. The simulation results showed that implementing the shell temperature trajectory derived by the proposed approach with 5% recycle ratio of CO2 increased the production of methanol by approximately 2.5% compared to the existing operating conditions.