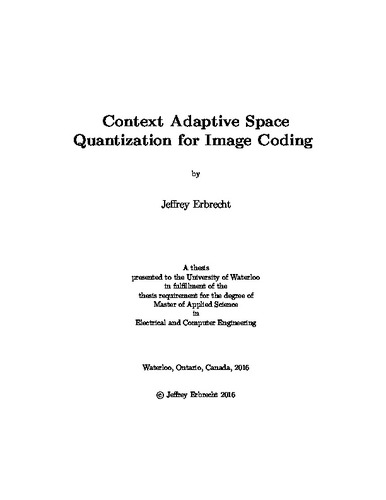 One of the most widely used lossy image compression formats in the world is JPEG. It operates by splitting an image into blocks, applying a frequency transform to each block, quantizing each transformed block, and entropy coding the resulting quantized values. Its popularity is a results of its simple technical description and its ability to achieve very good compression ratios. Given the enormous popularity of JPEG, much work has been done over the past two decades on quantizer optimization. Early works focused on optimizing the table of quantizer step sizes in JPEG in an adaptive manner, yielding significant gains in rate-distortion (RD) performance when compared to using the sample quantization table provided in the JPEG standard; this type of quantizer optimization is referred to as hard decision quantization (HDQ). To address the problem of local adaptivity in JPEG, optimization of the quantized values themselves was then considered in addition to optimizing the quantization table; this type of optimization is referred to as soft decision quantization (SDQ). But even SDQ methods cannot fully overcome the problem of local adaptivity in JPEG; nonetheless, the results from SDQ optimization suggest that overcoming this problem has potentially significant gains in RD performance. In this thesis, we propose a new kind of quantization called context adaptive space quantization (CASQ), where each block in an image is quantized and subsequently entropy coded conditioned on a quantization context. This facilitates the use of different quantizers for different parts of an image. If an image contains regions of varying amounts of detail, for example, then those regions may be assigned different quantization contexts so that they may be quantized differently; then, quantizer optimization may be performed over local regions of an image rather than other the entire image at once. In some sense, CASQ provides the ability to overcome the problem of local adaptivity. We also formulate and solve the problem of quantizer optimization in both the HDQ and SDQ settings using CASQ. We then propose a practical image coder based on JPEG using CASQ optimization. With our coder, significant gains in RD performance are observed. On average, in the case of Huffman coding under HDQ we see a gain of 1.78 dB PSNR compared to baseline JPEG and 0.23 dB compared to the state-of-the-art method. In the worst cases, our image coder performs no worse than state-of-the-art methods. Furthermore, the additional computational complexity of our image coder when compared to baseline JPEG encoding without optimization is very small, on the order of 150 ms for a 2048 x 2560 image in the HDQ case and 4000 ms in the SDQ case.