The Making of Chang-Shin District: A Study in Top-Down and Bottom-Up Urban Development 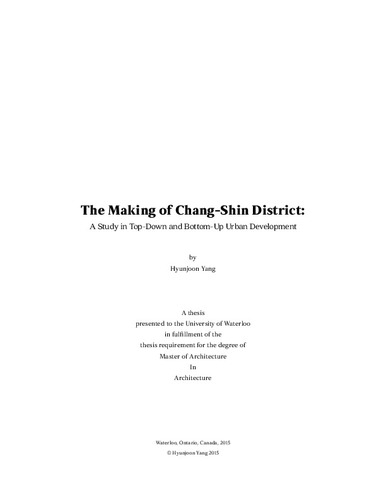 This thesis studies the process of urban development as a mass phenomenon involving top-down and bottom-up paradigms, which work as a whole to achieve distinct characteristics seen in urban neighbourhoods. In this study, the top-down paradigm describes the ways in which the governing authorities frame a neighbourhood’s development by controlling major urban factors affecting the overall city, whereas the bottom-up paradigm describes the ways in which individuals collectively build up their own neighbourhood through emergent patterns resulting from the decisions of each resident. In the final analysis, the workings of top-down and bottom-up urban development can be described as a cooperative process, where the on-going dialogue between the two paradigms allow them to work synergistically. As a key place of industry and commerce throughout Seoul’s history, Chang-Shin has maintained its historical and cultural characteristics even in the midst of the powerful forces of modernization that have changed the face of the city as a whole during the twentieth century. Remarking on the district’s unique characteristics and its complex urban structure, this thesis probes around three questions: how did the district come to be? How does it function now? And how could the existing urban characteristics be effectively utilized to enrich the urban life in the district? The intent behind the thesis is to analyze the rich and intricate urban phenomena observed in Chang-Shin, and further, to propose a modest design strategy that could improve the use of the district as a whole through working with local, small-scale components within the existing urban environment. The urban analysis categorizes the informal characteristics of Chang-Shin into programmatic and spatial types, within which the design proposal distinctly focuses on public space types as key urban elements where both the urban characteristics and social functions of the district are vividly manifested. At a time when the cultural authenticity of Seoul’s urban environment has diminished drastically, acquiring clearer knowledge of Chang-Shin’s urban structure and development process is critical for successfully managing the meaningful cultural heritage in the city.