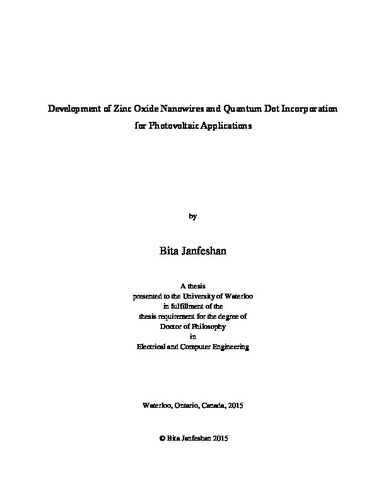 Heterojunctions of metal oxide semiconductors with quantum dots (QD) have been deployed in a number of advanced electronic devices. Improvement in the devices’ performance requires in-depth studies on charge carrier transfer dynamics. In this work, charge carrier dynamics, at the interface on zinc oxide nanowires (ZnO NW) with cadmium selenide QDs, were investigated. ZnO NWs were synthesized and characterized through the chemical vapor deposition (CVD) and hydrothermal methods. Both methods yielded highly crystalline ZnO structures. The hydrothermally grown NWs were doped with aluminum (Al) and the spectroscopy analyses showed that Al was successfully incorporated into the ZnO crystalline structure. Colloidal cadmium selenide/zinc sulfide (CdSe/ZnS) core/shell QDs were incorporated into synthesized ZnO NW arrays. The interaction and wettability of two different QD ligands (Octadecylamine and oleic acid) on the self-assembly of QDs in the NW spacing were investigated using electron microscopy. Afterwards, the charge carrier transfer dynamics at the heterojunction of NW/QD were studied employing time resolved photoluminescence spectroscopy (TRPL). A hypothesis on charge transfer kinetics, based on the experimental measurements, was provided. It was realized that photocharging of QDs is the main reason for substantial PL quench, when holes are not effectively removed from the photoexcited QDs by a hole-transporting medium. Furthermore, the TRPL measurements showed that the hole transfer rate by a polysulfide electrolyte is slower than that of an electron; one main reason in impeding the device performance in quantum dot-sensitized solar cells (QDSSC). The NW/QD heterojunction was deployed in the structure of a QDSSC. The current-voltage behavior of the cells under various conditions was characterized in both dark and light conditions. The underlying problems hindering the device performance were identified by these characterizations. Heterojunction of ZnO NWs with a GaN thin film was also deployed in the structure of an LED. The NWs were grown on GaN film using the hydrothermal method. The fabricated device exhibited light emission under both forward and reverse bias injection currents. The electroluminescence and PL characterizations revealed that the light emission from the fabricated device depends on the point defects and interface states of the two semiconductors.