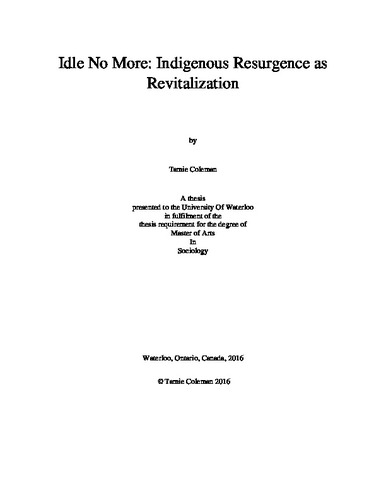 North American Indigenous people throughout contact have resisted the paternalistic and assimilationist policies of colonization. In recent history, Indigenous peoples resistance has been predominately localized in nature. However, the current resistance is widespread. Despite the fact that Bill C-45 was the catalyst for Idle No More (INM), the resistance encompasses deeper meanings for those standing against the current status quo than the solely political concerns covered by the media. In order to fully understand contemporary Indigenous resistance this thesis will be the result of a collaborative research effort that will challenge the mainstream research and theoretical models when seeking to understand Indigenous people and their acts of resistance. In this thesis I will argue that, in taking a cue from Alfred’s concepts of Wasasé and Indigenous resurgence, modern Indigenous resistance may be interpreted as a contemporary expression of classical revitalization movements. Thus, by engaging the work of Indigenous academics and the grassroots people at all levels of inquiry: methodologically and theoretically this thesis argues that we can gain a more comprehensive understanding of the motivations and choices of resistance actors. The focus for understanding the motivations and strategies of the actors in INM will reflect the work of Taiaiake Alfred, whose concept of Wasasé has given Indigenous people a framework for a theorized and effective form of resistance at political, economic, spiritual, and cultural levels. Additionally, the peoplehood matrix that has its origins in the work of Edward Spicer will provide a framework for understanding some of the not so apparent meanings, goals, and messages in Indigenous resistance.