The Effects of Confinement on Kelvin-Helmholtz Billows 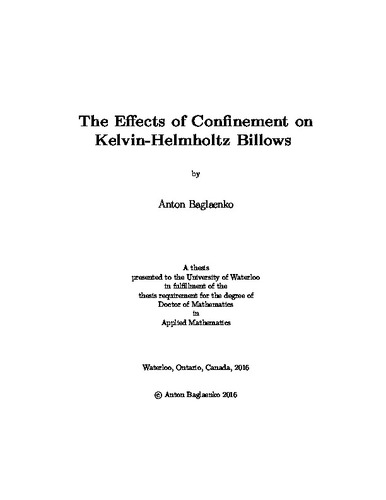 Turbulence is one of the most interesting and important, yet poorly understood, aspects of fluid mechanics. The transition from an unstable laminar flow to a fully turbulent flow can follow many paths depending on the background flow, stratification, and the boundary conditions. This study reconsiders a well-studied transition route, namely shear instability of a stratified fluid. The primary objectives of this study are the quantification of the effects of confinement by no slip walls on the evolution of Kelvin-Helmholtz (KH) billows, the application of metrics from turbulence theory to this flow, and the visualization of the dominant three-dimensional dynamics of the flow at a given time. The results are presented in three chapters. First, the evolution of confined KH billows is examined as it is affected by the vertical domain in a tilted-tube type numerical experiment for a variety of vertical domains and stratifications. The results indicate that confinement dramatically affects the evolution of the KH instability and the induced regions of viscous dissipation. A novel flow structure is the development of anti-billows in the unstratified portion of the domain prior to spanwise destabilization of the flow. Borrowing from turbulent literature the second and third invariants of the velocity gradient tensor (Q and R) are examined as a tool for the visualization and categorization of flow topology. These tools are used to analyze several canonical fluid flows (such as channel flow and Burgers vortex) from an analytical point of view; they are then applied to transitional flows (namely KH billow formation and evolution). Simple extensions to the confined KH billows and turbulent metrics are presented in the final chapter with emphasis on verification of established techniques and an eye for future research directions. The role of no-slip boundaries is investigated and deemed critical to the results of the KH billow simulations. The turbulent metrics Q and R are applied to a different type of numerical simulation (large eddy simulation) and a variety of visualization techniques from the literature is compared with a goal of unambiguously identifying coherent structures.