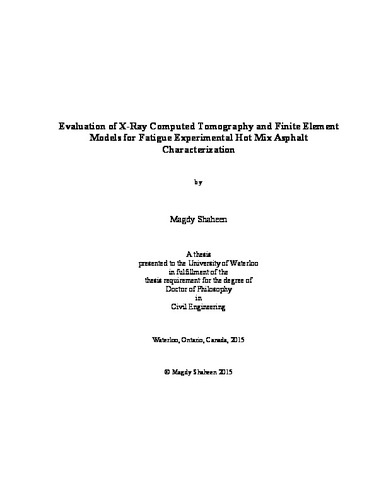 Fatigue cracking is one of the major distresses of surface hot mix asphalt (HMA) pavement that shorten pavement service life. Under typical Canadian weather conditions, fatigue distress requires frequent and high-cost maintenance and is therefore always a key concern for pavement construction and design engineers. The primary focus of this thesis was the development of an advanced understanding of the mechanisms underlying fatigue resistance in surface HMA materials. The research objectives have been achieved through extensive experimental evaluation, advanced image-based characterization techniques, and three-dimensional (3D) image-based microstructural finite element (FE) modelling. The findings of this study can therefore be considered a guide for the development of HMA that exhibits superior fatigue performance for use in pavement designs that might lead to longer-lasting pavements and enhanced performance. The experimental work involved an evaluation of the sensitivity of the fatigue resistance of surface HMA mixes to three primary design variables. Aggregate type, binder type, and binder content as well as their interaction have been quantified with respect to their effects on HMA fatigue life, rutting resistance, and stiffness. The objective was to optimize the design by extending fatigue performance while reducing the confounded negative effect on rutting resistance. Two aggregate types were used in the evaluation: Superpave SP12.5 and high friction SP12.5FC2. Two performance graded binders (PG 64-28) were also employed: a modified binder (PG Plus) that meets Ontario Laboratory Standards (LS) specifications and an unmodified binder at two binder levels (optimum and optimum plus 0.5 %). The results show that when a high friction aggregate is used, the value of modifying the binder to produce softer mixes can be compromised due to the irregular shape associated with the texture, which produces stiffer mixes. A slight adjustment to the amount of binder (+ 0.5%) can decrease this effect. Superior HMA fatigue performance was exhibited by the regular 12.5 aggregate and the PG Plus at the optimum binder content plus the additional 0.5 %. This conclusion was reached through the integration of the positive effects of the variables investigated. The experimental findings also revealed only an insignificant reversible impact on rutting resistance. A high friction aggregate provided a better internal structural characteristic as well as superior rutting resistance and stiffness in the HMA mixes. The use of PG Plus and the addition of 0.5% to the optimum binder content negatively affected HMA stiffness and rutting resistance. However, the levels of rutting resistance for all mixes were acceptable (rut depth < 12.5 mm), even when shear upheave was considered. Three imaging techniques were utilized for an advanced image-based investigation of HMA characteristics and performance: scanning electron microscopy (SEM), a combination of a simple scanner and Ipas2 software to depict the two-dimensional (2D) internal structure of the test specimens, and nondestructive X-ray computed tomography (CT) for 3D analysis. Aggregate texture was compared using 3D visualization of the SEM images, a technique that provides very high resolution. The rutting resistance of the HMA mixes was investigated using 2D images of the experimentally tested specimens, which involved estimating the number of aggregate contacts, the total contact length, and the Internal Structure Index (ISI). The ISIs measured were effective for capturing changes in the internal HMA structure with respect to aggregate type and asphalt cement content. A framework was established for employing X-ray CT for the assessment of HMA fatigue damage. The analyses were carried out on asphalt beams in order to quantify the damage created by four-point bending loads. A new algorithm was developed for calculating the thresholding levels of the images acquired before and after testing. The thresholding levels prior to testing were estimated using laboratory air voids. To determine the post-testing thresholding levels, the proposed algorithm matches 16-bit image histograms obtained before and after the testing. This process is implemented only for the portion of the histogram that represents the aggregate colour intensities that remain unchanged during the testing. The results and analysis reveal that the developed technique is a valid method for successfully quantifying and evaluating HMA fatigue damage in large specimens. Because of the high degree of precision they provide, 16-bit images are recommended for this type of analysis. It was found that the distribution of both air voids and damage is non-uniform in asphalt beams and that it varies significantly throughout the length of a single beam as well as from beam to beam. This study also confirms the effectiveness of X-ray CT for quantifying HMA fatigue damage in asphalt beams following crack propagation. A microstructural FE model based on 3D X-ray CT images was developed as a means of investigating the effect of asphalt mixture constituents on mechanical responses. The model takes into account the complex 3D geometry, spatial distribution, volume fraction, and mechanical behaviour of each individual component of the asphalt mixture. Three mixture components were modelled: the aggregate, the fine aggregate asphalt matrix (FAM), and the air voids. The primary objective of developing this model was to quantify and enable the visualization of the effect of air voids and the aggregate modulus on the FAM phase, which is the domain in which fatigue cracking initiates and propagates. The results demonstrate that air void distribution and the aggregate modulus have a strong impact on local stress concentrations that occur in the FAM domain. The developed 3D microstructural model has notable potential to enhance HMA design methods.