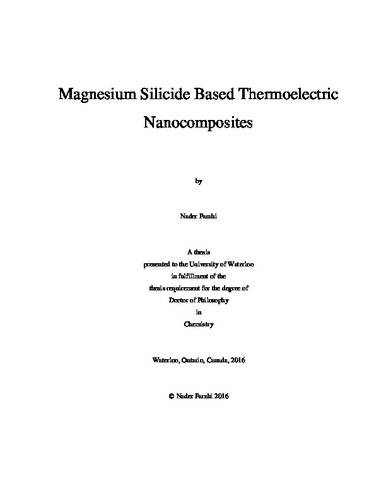 The major objective of this thesis was to investigate how far the thermoelectric (TE) properties of magnesium silicide based materials can be enhanced via doping, alloying, and nanostructuring. The investigation of Sb and Bi doped Mg2Si showed experimentally that the dopants can indeed substitute Si in the crystal lattice. The excess Sb and Bi atoms were found in the grain boundaries, most likely in the form of Mg3Sb2 and Mg3Bi2. As a consequence, the sample showed lower carrier concentration than the formal Sb/Bi concentration suggests, and the thermal conductivity was significantly reduced. The investigation of the effect of germanium substitution for silicon in bismuth doped Mg2Si, showed that the alloying drastically reduced the room temperature thermal conductivity partially due to the added mass contrast and the existence of Ge-rich domains within the sample. Due to the increased in the amount of scattering centers caused by Ge alloying, the electrical conductivity was also decreased while the Seebeck coefficient was increased only very slightly. In summary, the positive effect of Ge substitution on the TE properties of Bi doped Mg2Si resulted in a figure of merit of 0.7 at 773 K for Mg2Si0.677Ge0.3Bi0.023 sample. The addition of multi wall carbon nanotubes (MWCNT) to the Mg2Si0.877Ge0.1Bi0.023 resulted in an improved electrical conductivity, in particular around room temperature. The Seebeck coefficient of all nanocomposites is enhanced at 773 K due to energy filtering that stems from the introduction of CNTs - Mg2Si0.877Ge0.1Bi0.023 interfaces. The lattice thermal conductivity of the nanocomposites is reduced due to the phonon scattering by nanodomains and grain, particularly at medium temperatures, resulting in a slight reduction in total thermal conductivity. All in all, the thermoelectric figure of merit of the sample containing 0.5 weight-% MWCNT was enhanced by about 22% as compared to the pristine sample. Finally, the investigation of the effect of silicon carbide (SiC) nanoparticles on the TE properties of Mg2Si0.676Ge0.3Bi0.024 revealed that increasing the concentration of SiC nanoparticles systematically reduced the electrical conductivity, while enhancing the Seebeck coefficient. In spite of its high thermal conductivity, SiC could successfully decrease the lattice thermal conductivity through adding more interfaces. The HRTEM study showed the existence of both Ge and Bi in the Si position, and some Bi segregation at the boundary. In summary, the figure of merit reached its maximum value of 0.75 at 773 K for the sample containing 0.5 wt.-% SiC, which is among the highest achieved in the Mg2Si1-xGex system.