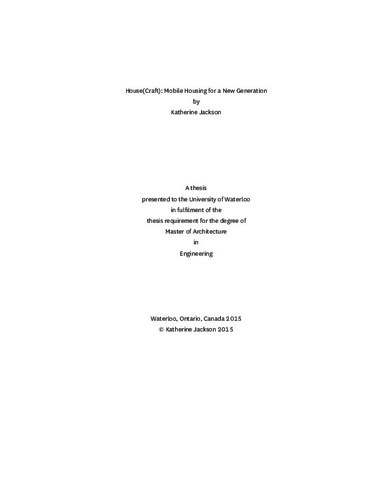 We have been called the “entitled” generation. We want to be your boss before we’ve stepped through the door. We grew up in the Internet Age; being told we were special, unique, and capable of anything we wanted. We are between 20 and 30 years old, highly educated and underemployed. We want to buy houses but we can’t afford them. We are the Millennials. The current housing market is out of reach for first time home buyers. Beyond the price tag, it is not well suited to the mobility of a Millennial lifestyle. The design, aggregation, and mobility of dwellings is a reflection of the cultural circumstances in which they are built. The suburbs were built for a different generation. The last generation was financially able to commute, and was willing to sacrifice time in order to afford a large suburban home. The Millennials face a different cultural context. Millennials would rather live smaller and more economically in order to live closer to where they work, study, and play. Also, the desire to remain in a viable job market, or to advance their education, requires Millennials to relocate frequently. Therefore, the investment in a static house is further delayed due to the requirement to “settle down”. According to a survey by Fanny-Mae 90% of Millennials still do aspire to own a house.1 However a house suited to Millennials will differ from its suburban predecessors. Millennials would rather relocate than commute and herein lies an opportunity. Due to the shifting needs of Millennials – primarily economy, mobility and proximity to an urban center, a small, urban, mobile dwelling could better provide access to home ownership. Micro houses could slowly take over unoccupied territories such as those which were previously occupied by the cars of the commuter generation. Surface parking lots could be transformed to create house-parking lots resulting in a denser and more vibrant urban fabric. Municipal laws around mobile, micro dwellings are complex and highly regional. From their introduction, prefabricated mobile dwellings have been considered a blight due to their relationship to poverty. City zoning officials have relegated them to the edge of the city through exclusionary zoning laws. An increasing number of urban squatters in mobile “tiny houses” are putting pressure on these laws. These early adapters represent a growing desire for a new housing typology and relationship to the city. My thesis explores the opportunities provided by this concept of ownership and mobility. Individual units could become highly tuned to the person(s) occupying them – morphing each unit into an indispensable platform from which users occupy a city. This new concept of home would allow an increasingly mobile population to resituate with ease – finally reconstituting home with our wandering lifestyle. 1. Fannie Mae, Fannie Mae National Housing Survey(tm): Millennials Look to Income Imporvements as Key to Unlocking Homeownership, report, August 2015, accessed November 18, 2015, http://www.fanniemae.com/resources/file/research/housingsurvey/pdf/082115-topicanalysis.pdf.