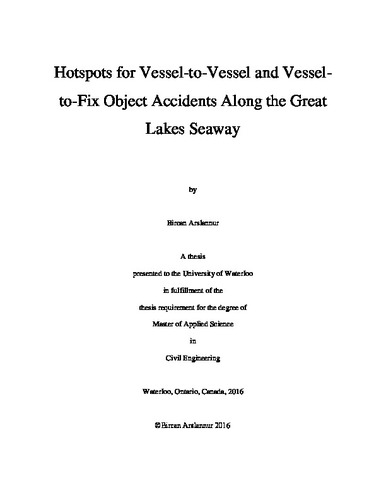 This research focuses on the freight vessel accidents occurring on the Great Lakes Seaway (GLS) extending from Rimouski (on the St. Lawrence) to Sault Ste. Marie (connecting Lake Huron to Lake Superior). Over the past decade, an average of 112 vessel accidents per year have been reported along the GLS, 20% of which took place as a result of groundings and collisions with other vessels. The vast majority of these accidents took place on river and canal/lock segments of the seaway. Freight vessel accidents along the GLS tend to be clustered at specific unsafe locations. In this research, locations with high vessel accident occurrence are referred to as hotspots. The first step in vessel accident reduction is to identify hotspots along the GLS, which then become prime candidates for future safety intervention initiatives. Given the rare and random nature of vessel accidents, the identification of hotspots needs to be based on robust site-specific prediction models. This research presents an empirical Bayes prediction model developed for the Great Lakes Seaway (GLS) that considers four types of accident scenarios: vessel-to-vessel (VV) and vessel-to-fix objects (VF) for river and canal/lock sections. Hotspot sites are determined using two risk tolerance thresholds: 95th percentile exceedance (high risk sites) and 85th percentile exceedance (moderate and high-risk sites). For the 95th percentile threshold and VV accidents, a total of five hotspots were identified over the 1600 km length of the GLS being studied (excluding lake or port areas). Of the designated hotspot sections, 10 km (60.6% of the total hotspot length) were located along natural river courses and the rest at canals/locks. For VF accidents, all of the high-risk hotspots were located at canal/lock sections (a total of 15.5 km). Reducing the threshold to 85th percentile resulted in a 7.8% increase in seaway length that is designated as a hotspot. VV and VF accidents were combined and for these accidents, hotspots were obtained for the 95th and 85th percentile thresholds. For the 95th percentile a total of five sections (14 km, 0.88% of the seaway) were identified as hotspots, and for the 85th percentile the number of hotspots were increased to 16 sections (47.72 km, 3% of the seaway). These unsafe locations were also compared with observed historical accidents along the GLS, and the location of the observed accidents were found to be consistent with hotspot designated sections along the GLS for both thresholds.