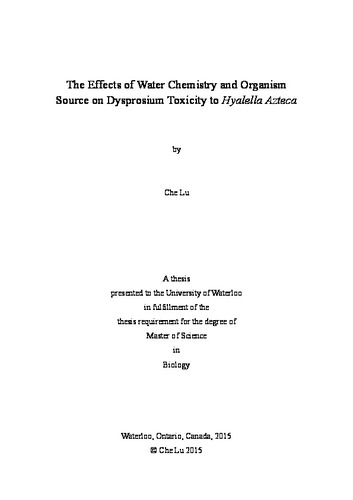 Rare earth elements (REEs) are a series of seventeen chemical elements, containing mostly lanthanides. Due to their multiple applications in industry and consumer electronics, global demand and production of REE has been increasing. Canada has the potential to be one of the major REE producers, with reserves mainly located in northern regions, yet there is limited knowledge of the potential environmental impact of mining and refining of REEs. Dysprosium (Dy) is one of the most widely used heavy REEs due to its magnetic strength. In this study, acute 96 h toxicity tests were conducted to determine the sensitivity to Dy for four different sources (Fort Hope, Hannah Lake, Daisy Lake, Low Water Lake, ON) of Hyalella azteca as well as Daphnia pulex. LC50s and their confidence intervals derived from dissolved Dy concentrations indicated significant differences in Dy sensitivity as a function of the source of H. azteca. To determine the potential influence of toxicity modifying factors on Dy toxicity, acute (96 h) and chronic (28 d) toxicity tests using H. azteca were conducted with differing concentrations of Ca2+, Mg2+ and Na+ (acute test only), differing qualities and/or concentrations of dissolved organic carbon (DOC) as well as differing pH. Based on LC50 data for 96 h tests, Ca2+ (2 mM), Na+ (2 mM), low pH (6.7) and DOC (Suwannee River, USA; 9.6 mg/L), but not Mg2+ (up to 2 mM) demonstrated protective effects against Dy toxicity. In addition, pH played an important role in Dy solubility. For 28 d exposures, protective effects against Dy toxicity were demonstrated for Ca2+ (2 mM), Mg2+ (0.5 mM) and DOC (White River and Luther Marsh, ON; 6.4 and 7.8 mg/L respectively) based on dissolved Dy LC50s. Both types of DOC were found to partially ameliorate growth inhibition at low Dy concentrations. One of the sources of DOC (Luther Marsh) was very effective at reducing Dy bioaccumulation in H. azteca. The LC50 data for 96 h toxicity tests contributed to building a preliminary Dy biotic ligand model (BLM) of H. azteca, which will assist with estimations of Dy toxicity in aquatic systems that differ in water quality and provide knowledge to direct the establishment of water resource protection guidelines of REE in Canada.