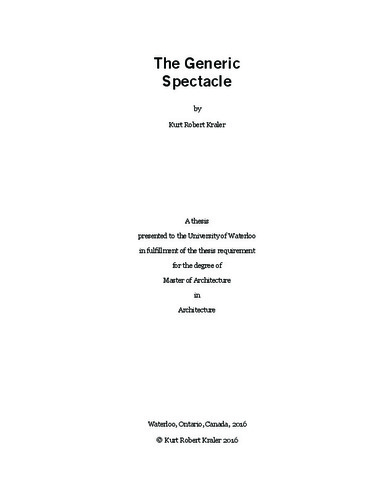 The completion of the CityCenter resort on the Las Vegas Strip in 2009 by MGM Resorts marks the single largest privately funded development in American history. It also marks a departure from all-encompassing themes of kitsch, masquerading as a self-sustaining city with condominium towers, an extensive public art program and a fire station. However, the development ultimately fails to deliver on its touted claims of a “pedestrian focused urban plan”, devoid of the essential public amenities that allow cities to meet the needs of its citizens. French theorist Guy Debord prefigures this subsequent downgrading of ‘having’ into merely ‘appearing’ within contemporary capitalist society with the release of The Society of the Spectacle in 1967. During the same time period, Robert Venturi, Denise Scott Brown and Steven Izenour would release Learning from Las Vegas, identifying the increased prominence of the sign within the emerging “American commercial vernacular”. Rem Koolhaas followed with ‘Relearning from Las Vegas’ in 2001, a study of the Las Vegas Strip comparing then-and-now along with an accompanying text in which he credits Learning from Las Vegas as the first in a trend of books about cities. In the accompanying text, Koolhaas also states that the seminal study was “a manifesto for the shift from substance to sign...decipher[ing] the impact of substance on culture”. This culminates in what I am proposing as “The Generic Spectacle”, a hypothesis that describes the widespread proliferation of Las Vegas Strip-style urbanism in countless contemporary city centres. The writings of Guy Debord and Rem Koolhaas will comprise a framework in which the development of the region will be theorized, supported with contributions from the fields of economics, sociology, and geography. Subsequently, the history of development in the Las Vegas region will be divided into three distinct parts in order to define the pre-existing conditions that generate The Generic Spectacle. The first includes the foundations of the spectacle as defined by Debord, with the aligning of State and economic interests alongside incessant technological renewal. It will be argued that the modernist concept of ‘tabula rasa’ would underscore these two foundations. Secondly, the widespread liberalization that occurred in postwar America would reinforce Las Vegas as the centre of resurgent capitalism with a service-based leisure economy as its primary vehicle. A powerful convergence of capital would give rise to increasing monopolization and result in an all-encompassing resort campus building typology. Finally, the manufacturing of fantasy inherent in the themed environments of the Strip serve to obscure a troubling duality of freedom, one that is reinforced by the close proximity of Las Vegas and the United States Air Force. A prevailing sense of destruction is apparent throughout the history of the region with the constant razing of buildings for larger resorts and the systematic dismantling of a collective public under the ongoing processes of neoliberalism. Through a review of the development of the Las Vegas Strip, this thesis will theorize convergence, the erasure of labour and historical context along with the broader implications of The Generic Spectacle as it pertains to the fields of architecture and urbanism.