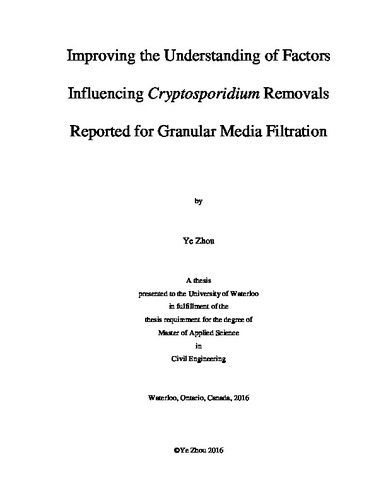 Cryptosporidium is an important waterborne protozoan pathogen which has been implicated in several large gastrointestinal disease outbreaks attributable to inadequate treatment of drinking water. Unfortunately, Cryptosporidium oocysts, the life cycle phase found in water, are highly resistant to conventional disinfectants such as chlorine and chloramines. As such, rapid granular filtration (preceded by adequate coagulation) serves as an important barrier against the passage of Cryptosporidium oocysts. However, a wide range of Cryptosporidium removals, from 1.4 log to 5.8 log, have been reported from various pilot- and full-scale filtration investigations (with or without removals by clarification), with the reasons behind the substantial variability not well understood. The disparity in published data leads to uncertainty in developing expectations for the removals that can be reasonably achieved by filtration processes. To further complicate the interpretation of these studies, there is still some uncertainty involved with accurate oocyst enumeration. The objective of this research is to investigate reasons behind the substantial variability in oocyst removals reported in the literature by attempting to link them to differences in raw water characteristics, coagulant conditions, filter design, filter operation, and analytical and experimental methods. This research included two components: (1) a thorough review of the literature, and (2) the development, distribution, and analysis of a questionnaire to access industry knowledge and insights that might not necessarily be reflected in the peer-reviewed literature. An up-to-date review of published studies was conducted with the intent of identifying the potential effects of a variety of factors as they relate to the determination of Cryptosporidium oocyst removals by granular media filtration. However, the amount of detail contained in published studies is still somewhat limited and the current data pool is not sufficiently extensive to definitively identify reasons behind the substantial variability in removal data. As an outcome of the review, it was felt that views from drinking water professionals on the factors which may have an impact on reported Cryptosporidium removals by granular media filters would enhance research into this important topic. In developing the questionnaire, thirty-three influencing factors were identified, and these fall into six groups. In total, 39 completed questionnaires were returned, representing a response rate of 35%. In addition, 260 open-ended comments were collected. Statistics from the background survey revealed that the majority of respondents could be considered to be sufficiently knowledgeable to be able to provide valuable input (with more than 70% of respondents having direct involvement in research on Cryptosporidium or/and surrogate removals through filtration). From the questionnaire, consensus was reached that the most influential factors were optimized coagulant dose (95% of respondents rated it as having a strong influence) and filter effluent turbidity (81% rated it as having a strong influence), while the least influential were Cryptosporidium species and the use of chlorinated backwash water (0% rated them as being strongly influential). A weighting system was developed to evaluate the overall influence of an identified factor on Cryptosporidium removal through filtration and a sensitivity analysis was conducted to evaluate the robustness of the weighting system. The weighting system ranked the importance of optimized coagulant dose, filter effluent turbidity, Cryptosporidium oocyst detection limit, Cryptosporidium recovery adjustment, and Cryptosporidium spike concentration as the five most influential factors (in that order). For most findings, the questionnaire results demonstrated consistency with literature results. This research narrowed down the factors contributing to uncertainty in developing expectations for Cryptosporidium removals in a given situation, by ranking the influence of each of a number of factors. It also identified some potentially important issues/factors whose effects have not yet been assessed, and provided useful information and some speculation which may not have been reflected in published studies. However, it may not be possible to single out any one factor which accounts for a substantial portion of the variability; in fact, the reported differences may not be attributable to any single factor, but rather a group of factors.