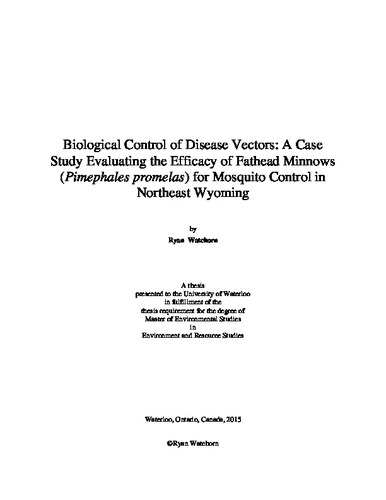 West Nile virus (WNv) has become a significant and increasing threat to wildlife populations and human health throughout North America. Mosquito control is an important and potentially effective means of controlling the spread of WNv, as the virus is primarily spread between avian and mosquito vectors. This is of particular concern for avian host species such as the Greater sage-grouse (Centrocercus urophasianus), where WNv has been documented to negatively affect sage-grouse survival to the point of possible local extirpation. The most common mosquito control methods focus on controlling mosquitoes at their larval life stages. Efforts have primarily been limited to larvacide pucks or sprays, which require repeated application and could have potentially negative ecological consequences. Here, my primary objective is to test the efficacy of using fathead minnows (Pimephales promelas) as a biological control for mosquito populations in northeastern Wyoming. Specifically, I address two main questions: 1) does the presence of fathead minnows influence mosquito larva density within reservoirs, and 2) what pond and water quality characteristics support viable populations of fathead minnows? In the summers of 2013, 2014, I introduced minnows into 9 of 16 monitored reservoirs. The presence of fathead minnows, mosquito larva density, and adult mosquito populations were monitored at all sites on a weekly basis during 2013. During the 2014 and 2015 seasons, tissue samples were collected for stable isotope analysis, and fathead minnow population density was measured and recorded at the beginning and end of each season. Results indicate that minnows are a promising alternative to controlling mosquito larvae density within these reservoir environments. The presence of fathead minnows lowered and suppressed temporal variation in mosquito population densities throughout the summer seasons. Additionally, self-sustaining minnow populations established at the majority of sites. Water quality parameters measured did not influence survivability at the ranges detected in these reservoir environments. Overall, the efficacy, life history traits and tolerance ranges of the fathead minnow make them ideal biological control option in cattle reservoirs within arid rural environments.