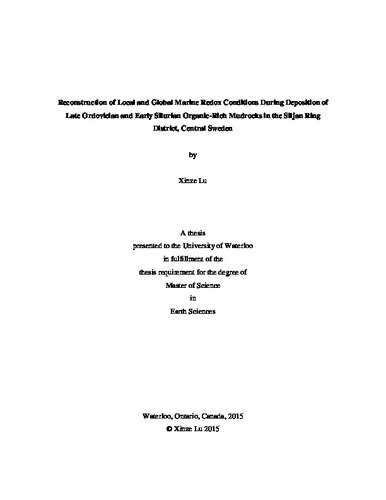 Hi, I cannot see any gap in my title words like "Dep osition" and "Sil jan". I have opened my PDF through chrome and adobe acrobat and have not seen the errors you proposed. I do not know how to edit it. Thank you! (1.663Mb)

The Ordovician-Silurian transition witnessed the second largest mass extinction in the Phanerozoic Eon and the Hirnantian glaciation. We measured U (as δ238U relative to standard CRM145 = 0‰) and Mo (as δ98Mo relative to standard NIST SRM 3134 = +0.25‰) isotope compositions on 26 organic-rich mudrock (ORM) samples of the Late Ordovician (Katian) Fjäcka Shale and the Early Silurian (Rhuddanian-Telychian) Kallholn Formation to infer local and global ocean redox conditions across the Ordovician-Silurian transition. The magnitude of Re, Mo, and U enrichments, Re/Mo and U/Mo ratios, and sedimentary Fe speciation point to euxinic and oxygenated bottom water conditions during deposition of the Fjäcka Shale and upper Kallholn Formation equivalent gray shales, respectively. The same proxies suggest that the more organic-rich samples of the Kallholn Formation were deposited under transiently euxinic conditions with the chemocline situated near the sediment-water interface. The Mo and U isotope compositions of the most euxinic shales provide the most relevant estimates of the extent of global ocean oxygenation. As expected, the euxinic Fjäcka Shale yields relatively higher average δ98Mo (0.82‰) of the studied units. Elevated Mo/TOC ratios (average: 13.5 ppm/wt%) of the Fjäcka Shale suggest no more than moderate basin restriction from the open ocean as well as large amounts of Mo in the euxinic bottom waters, which can lead to Mo isotope fractionation between seawater and sediments like that observed in the Cariaco Basin. Hence, we infer that the heaviest Mo isotope composition preserved the euxinic Fjäcka Shale (1.28‰) may be fractionated from contemporaneous seawater. As such, the Mo isotope paleoredox proxy is not reliable on its own. This interpretation is further supported by the high average authigenic δ238U (–0.05‰ to 0.02‰; or an average of ~0‰) in the Fjäcka Shale, which is only slightly lower than the modeled value of 0.1‰ for modern euxinic sediments in moderately restricted basins (i.e., between the highly restricted Black Sea [0‰] and open ocean euxinic sediments [0.2‰]). Widespread ocean anoxia should lead to deposition of ORMs with lower δ238U. Hence, the relatively high δ238U coupled with high Mo, Re, and U enrichments, and high Mo/TOC ratios in the Fjäcka Shale suggest a more oxygenated ocean prior to the Hirnantian glaciation than previously thought, though the extent of oxygenation was less than today. Integration of our data with previous studies further supports the hypothesis that ocean oxygenation intensified from the late Katian to the early-middle Hirnantian in association with global cooling, thus challenging the hypothesis that pronounced ocean anoxia persisted throughout the late Ordovician.