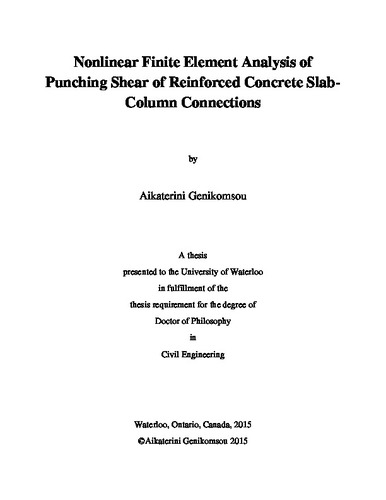 The code provisions for the design of reinforced concrete slabs are based on empirical and mostly statistical formulations derived from the tests. The available testing database consists of different types of slabs and in some cases it is limited due to the extensive cost and time that a punching shear test requires. Thus, there is a need for verification of the actual code provisions and this can be done in part by using finite element (FE) simulations. The finite element analyses (FEA) can supplement the existing testing background and can be used for parametric investigation, since they can indicate different aspects on punching shear failure, leading to possible recommendations for the design codes and models. In this thesis, 3D FEA of reinforced concrete slabs with the FE software ABAQUS using the concrete damaged plasticity model are presented. The appropriate calibration of the concrete model, is done in this study based on an interior slab-column connection without shear reinforcement (SB1), considered as the control specimen, which was tested under vertical loading in a previous study. The predictive capability of the calibrated model was demonstrated by simulating and analyzing different types of slabs without shear reinforcement. Interior specimens under static and reversed cyclic loadings and edge slabs under static and horizontal loadings are examined. The predicted capability of the calibrated model is then examined by simulating slab-column connections with shear reinforcement. Four different modelling approaches for the shear bolts are presented. Discussion and comparison between the design codes are also presented. A parametric study based on the different shear reinforcement patterns that ACI code (rectangular) and EC2 (radial) propose is conducted. This study also involves the investigation of the effect of openings on the punching shear behaviour of the reinforced concrete slabs without shear reinforcement. The effect of the location, the distance from the column and the size of the opening on the punching shear resistance, are investigated. The results, confirm that the punching shear resistance is decreased with an increase in the opening size and with a decrease in the opening distance from the column. Finally, the compressive membrane action effect on reinforced concrete slabs is examined. FEA are performed considering an isolated interior flat slab (SB1) as continuous. The predictive capability of the FEA models enhance their effectiveness for further investigation on the effect of membrane action by supplementing the limited testing background in this area.