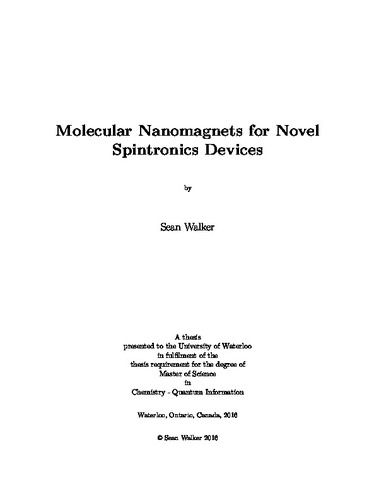 Molecular nanomagnets possess interesting quantum properties that make them potential candidates for qubits in quantum information processing. Heterometallic antiferromagnetic wheels specifically have been shown to have a coherence time long enough to permit quantum computing operations. The field of molecular spintronics deals with the integration of molecular nanomagnets into nanoelectronic devices for the purpose of probing and manipulating these quantum properties. In order for a nanomagnet to be incorporated into such a device it needs to be both magnetically and structurally stable when in contact with nanoelectronic components, and its coupling to the environment needs to be controlled. The first part of this thesis deals with the synthesis and characterization of a derivative of a member of the Cr7Ni family of heterometallic antiferromagnetic wheels. The synthetic process involved introducing long alkyl chains into the organic shell of the nanomagnet in order that it may interact with carbon-based nanoelectronic devices in a non-destructive capacity. The molecule was characterized in order to confirm the results of the synthesis, to gain a greater understanding of how its magnetic properties can be modelled, and to fingerprint the system in order to acquire data that will help determine whether its properties remain intact when attached to a graphene surface. The second part of this thesis concerns a series of experiments conducted toward developing a process for determining the viability of the synthesized nanomagnet as the molecular component in spintronics devices. To begin to determine the molecule's magnetic and structural stability when deposited on a graphene surface the first step is to realize clean graphene substrates that are suitably pristine such that a nanometre sized particle can be detected. Graphene flakes were fabricated using the mechanical exfoliation technique and a procedure was developed for cleaning the resulting flakes of residues. The next step of this research will consist of conducting systematic studies to quantify the binding affinity of the nanomagnet species to both graphene and to pristine carbon nanotubes, and to determine whether the system retains its structural and magnetic properties when attached to graphitic surfaces. The work described here lays the foundation for the novel use of Cr7Ni-eth and other functionalized magnetic molecules in spin-based nanoelectronic devices.